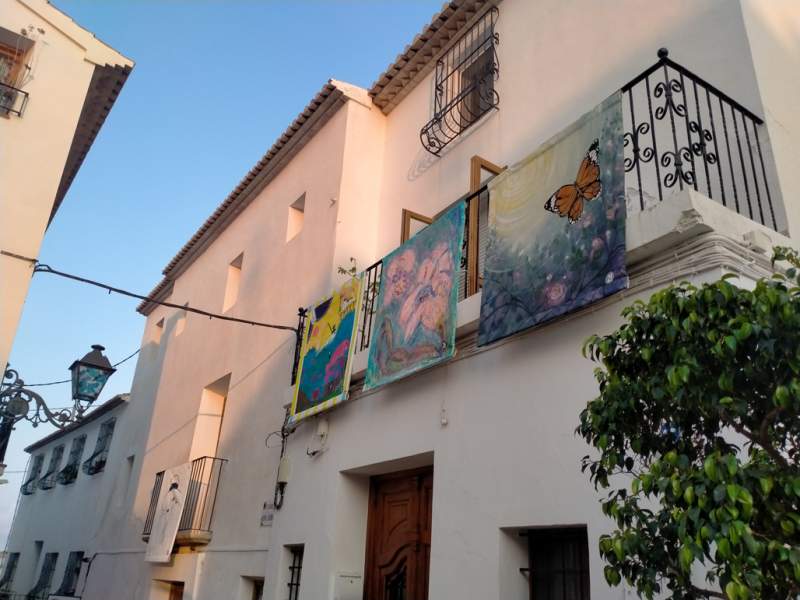 Balcony art THE streets of Altea’s Old Quarter are once again converted into an open-air gallery where artworks by professional and amateur artists are displayed on balconies.  The pictures will remain in Altea all summer before they move on to Alfaz in September, Agost in October and Benimantell in November.
Work-related A VALENCIA court declared that scabies affecting a member of staff at Picassent (Valencia) prison was an occupational disease and ordered that he should be paid for the time he was off sick.  The Administration must also pay him €500 to cover his legal costs, the court ruled.
Fiestas off LA NUCIA town hall confirmed that the municipality’s annual Festes Majors d’Agost celebrations, due to be held between August 14 and 18 have been suspended owing to the health situation caused by the Covid pandemic.  Despite the suspension, August 17 will remain a public holiday municipal sources said.
Pay up PAID parking in slots marked in blue has temporarily returned to central streets in Teulada and Moraira, with mayor Raul Llobell hinting this could return definitively next year.  Overstaying will mean a €20 fine while displaying a ticket without details of the time acquired will cost drivers €30.
Try it  A DENIA ice-cream parlour delivered ices to the leaders of the town’s political parties, ensuring that these corresponded to their rivals’ party colours and not to their own.  It was time to remember that “if it is good for Denia it is good for everyone” said Heladeria Verdu.
Sold out THE Idealista website’s holiday platform Rentalia predicted 94.4 per cent occupancy for Costa Blanca tourist apartments in August, almost 11 per cent ahead of last year and seven percentage points above 2019.  Only Menorca (97.8 per cent) and Mallorca (97 per cent) have better occupancy prospects, Rentalia said.
Helping hand  BENIDORM town hall intends to use a €300,000 allocation from the Diputacion provincial council to provide grants of up to €3,000 for nightlife venues and discos hit by anti-Covid restrictions.
Palm solution GANDIA city hall is replacing palm trees affected by red weevils with a different species, Syagrus romanzoffiana (queen palm), which is native to South America and is immune to weevils.
No protest BENITACHELL was able to hold a procession in honour of its patron, Santa Maria Magdalena, after the diocesan authorities obtained permission from the central government’s sub-delegation to organise a “demonstration.”
Fish supper DENIA’S coastguards, who confiscated two seabass and three bream from two divers poaching in the Sant Antoni marine reserve, afterwards donated the fish to the Evangelist church’s social dining room.