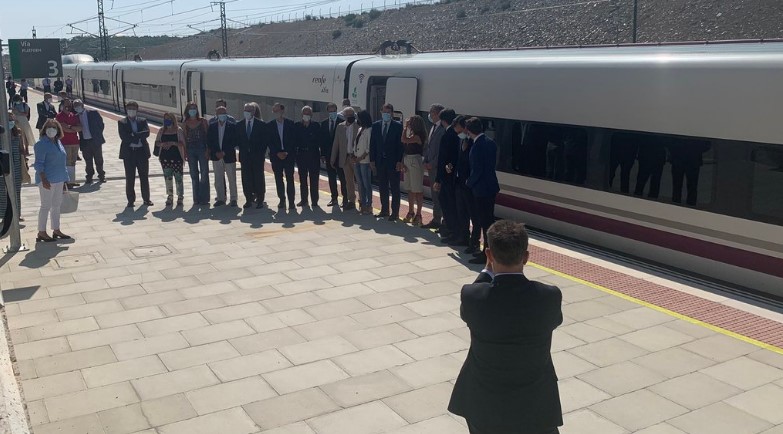 Spanish town with only 24 inhabitants gets its own AVE train station. image: [email protected]

Alfonso Fernandez Mañueco, the President of Castilla y Leon, accompanied by Raquel Sanchez, the Minister of Public Works, on Thursday, July 22, inaugurated the AVE new train station in the small town of Otero de Sanabria, which has just 24 inhabitants, who, after several months of seeing trains passing for Galicia, can now take advantage of the four daily services to Madrid and Galicia.

Sanabria now, as a result, is a short two-hour train journey away from the capital of Spain, with Mr Mañueco pointing out, “each communication system that reaches our towns and cities is a new pillar on which the life projects of our people will be supported, and this is one more step against the infrastructure deficit in northwestern Spain”.

The president vindicated the Spanish Government over the fact that there are still numerous pending infrastructure projects in the Community, between highways and railways, “all of them a priority, and essential to back up Castilla y León, and Spain, whose delays reduce the competitiveness of companies, slow down investments, and hinder the development of some provinces”.

For this reason, he has asked the minister to promote Spain “in a single direction and at a single speed”, in addition to an advance in communications with neighboring Portugal, as well as in rail communications to the north and north-west through Castilla y León, into Galicia, Asturias, Cantabria, and the Basque Country, along with a route into the Atlantic Corridor, in its northwest branch, and the central corridor.

In response, Minister Raquel Sanchez highlighted the Sanabria town and its new station as an example of the Government’s commitment to the Atlantic corridor, with the most sustainable means of transport and mobility for all, which has had an investment of €4 million.

During her speech, the minister pointed out that her department has worked on the recovery of all railway frequencies in the province, and referenced the start-up a few weeks ago of the “early riser train” that connects Zamora with Madrid, as reported by larazon.es.