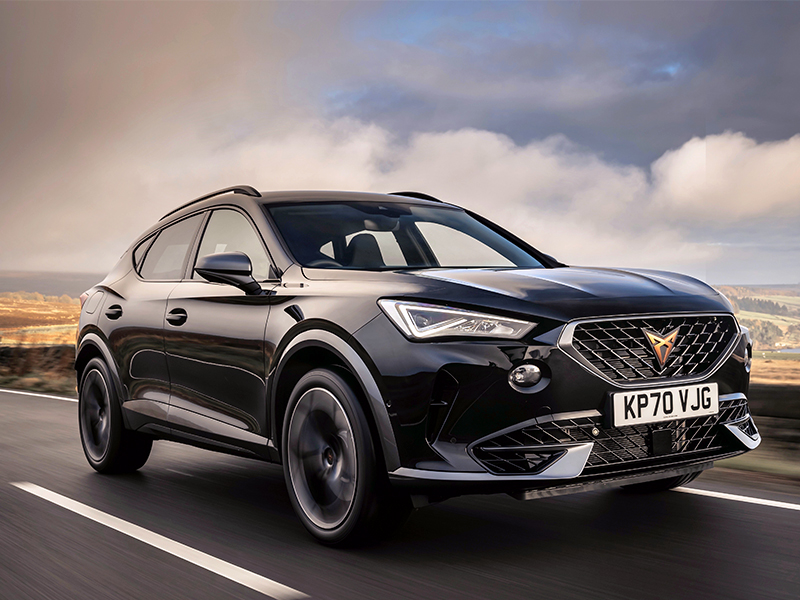 With so much integration of platforms, car makers are increasingly looking at differentiating their products from the competition, and within large groups like Volkswagen Audi it is arguably even more important.

SEAT has progressed this idea with the Cupra range. Originally Cupra were the sports orientated models within the SEAT line-up but the name is now a brand in its own right, having dropped the SEAT name, with a complete Cupra range.

While some are very obviously SEAT models the Spanish car maker has produced one model that doesn’t exist within its sister brand. The Formentor! It’s attached to a rather splendid car, and despite the fact that even the largest engine in the range is only 2.0-litres it sounds fantastic on start-up.

Although this is ‘manufactured’ sound it does add to the appeal and make it feel something special.  With a top power output of 305 bhp the performance lives up to the soundtrack.

Prices start from €32,360 (£27,745) and much of the kit in the top-of-the-line versions finds its way into the lead-in models too. There’s a 12” touchscreen, full LED lighting, auto-dimming rear view mirror, cornering lights, wireless phone charging, adaptive cruise control and keyless entry and start.

The engine line-up starts with a 1.5 TSi, 147 bhp, through to the 2.0-litre 305 bhp mentioned earlier. There are manual and automatic transmission choices, all-wheel-drive and petrol/electric hybrids.

As ever, especially with VAG products, there is rather too much digitalisation, and a consequent lack of buttons, but familiarity would over time make life easier.

That apart it’s a very nice place to be with, in my top line model, extremely comfortable seats and an impressive build quality and the general feel of this being an upmarket car.

At a shade under €50,153 (£43,000) this sounds expensive, but look at some of the competition and it begins to look competitive. Despite the lack of a premium badge it has the advantage of being something different to the premium crowd.

On the road it handles extremely well for such a large machine, with sports suspension and four-wheel-drive that’s perhaps not surprising, and the ride is comfortably firm compared to similar sports models within the VAG stable.

This is an impressive machine and for my money the pick of the Cupra range, being a very individual model rather than a bespoke, or tailored, pick straight from the pages of the SEAT catalogue.