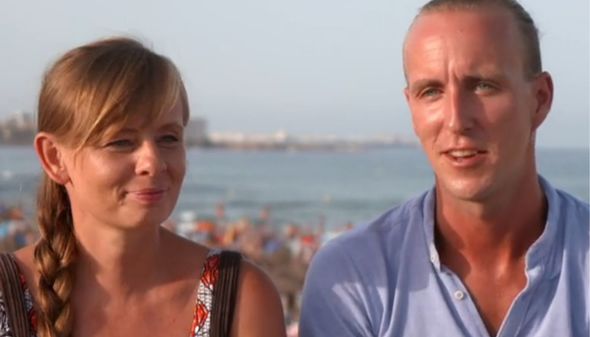 A New Life in the Sun couple have been forced to close their business after a storm hit the Spanish coast.
A NEW LIFE IN THE SUN couple were forced to close their paddleboarding business in Spain’s Costa Blanca after a devastating storm hit the Spanish coast.
On Sunday, August 1, an episode of A New Life in the Sun, the Channel 4 programme took a look back at the time couple Mark and Natalia set up their Spanish water sports business in June 2019.
The pair met in Spain and fell in love, shortly after, they decided to set up a paddleboarding business together as they both shared a deep passion for water sports, the Costa Blanca being the perfect place to set up the new venture for them.
Their business got off to a booming start, attracting hundreds of holidaymakers during their first summer season on the popular sunshine coast.
After welcoming their first child, the couple soon realised they needed a bigger income to support their family and so set up a paddleboarding business in another location. Speaking about their new business venture, Mark began: “It’s going to be fun trying to attract the new marketplace. Like I say, we are always up for a new challenge.”
Mark explained that their second business needed a cash injection and ended up spending 10,000 Euros on new equipment. Time was of the essence, and with only three months left of the season, the couple desperately needed to have a busy summer in order to claw at least some of their money back.
In a bid to boost turnover, the couple even extended their opening hours and expanded the number of activities they were offering. However, despite a successful opening, the couple’s venture suffered a blow in September 2019 when a major storm hit the coast – destroying many businesses and homes in its wake.
“It’s absolute mayhem. Look, at it. This used to be a boardwalk and that’s disappeared now. It’s been pushed out to sea. As you can see the carnage that has been caused. This wall which had been done at the start of the year has been destroyed now,” said Mark as he looked out at the wreck.
As they began to clean up the mess the storm had caused, Mark and Natalia had no option but to close their second paddleboarding business for the remainder of the season.
“It’s a bit unfortunate and obviously money will be lost. Being closed is never a good idea, you know? Especially as we have such a small amount of time to make our money,” Mark added.
When Channel 4 producers revisited the pair in September 2020, they discovered that the couple had hit another hurdle because of the coronavirus pandemic- also seeing fewer tourists than usual because of travel restrictions abroad.
As a result, they decided not to re-open their second paddleboarding site because of the lack of holidaymakers.
“This year because of the circumstances because of lockdown and the unknown situation in the future, we decided not to risk too much. Just in case because we may not be able to survive, basically,” said Natalia.
In a final bid to earn more income, the couple ended up opening up a fresh-food café on the coast which, to their great relief, has ended up being a huge success.