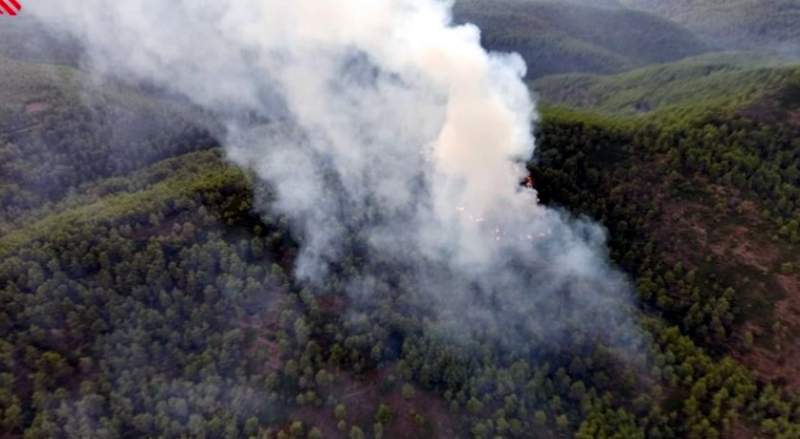 Generalitat Emergencies in the Valencian Community have reported that at least four forest fires were still actively burning into the evening of Saturday, August 14, due to the increasingly high temperatures causing outbreaks in different parts of the region, with fires in Bicorp, Denia, Culla, and Suera, a fifth fire that had broken out on Saturday morning in the Alicante municipality of Muro de Alcoi has reportedly already been extinguished.
In the Castellon municipality of Suera, firefighters have been using five ariel means to combat the blaze, along with three specialised forest fighting units, which led to the Generalitat Emergencies declaring situation 1 of the Special Forest Fire Plan (PEIF).
According to Emergencies of the Generalitat, this emergency situation is generated by there being several forest fires that, in their foreseeable evolution, can seriously affect forest assets and, where appropriate, slightly affect the population and non-forest assets.
In the Valencian area of Bicorp, a fire was declared in a pine forest area in the El Buitre region, in which five forest fire brigade units, four helicopters, six aircraft, three fire engines from the Valencia Consortium, a forest coordinator, and an environmental officer are all working to contain the blaze.
Denia, in the province of Alicante, has also been affected by a vegetation fire in which three aerial media, forest firefighters, and the Consortium are tackling the fire.
In Culla, Castellon, a fire broke out after a lightning strike, in which two units of forest firefighters, a fire prevention unit, an environmental officer, and two aerial means were fighting the blaze, which was brought under control, leaving volunteer firefighters from Alt Maestrat at the site in case of any excessive flare-up, as reported by larazon.es.