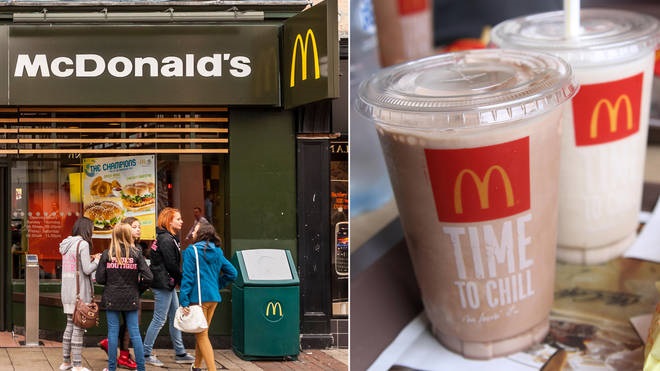 BREXIT laws continue to disrupt supply chains as McDonald’s runs out of milkshakes due to supply shortages.

McDonald’s has been forced to pull milkshakes from its menu due to supply chain issues it says have been triggered by Brexit. The fast-food chain has become the latest victim of a massive shortage of lorry drivers.

One customer said on Twitter: “I just went to McDonald’s – they’ve got no milkshakes and the fizzy drinks ‘might be flat’. What is going on?!”

Another disappointed fan shared a photo of an online order, showing the words ‘sold out’ next to every milkshake flavour.

A third added: “McDonald’s you don’t do bagels anymore or breakfast wraps, you now have no milkshakes, Tropicana or bottled water…”

The burger chain has also been left without bottled drinks across its 1,250 outlets in England, Scotland and Wales. A spokesman reportedly said the group is suffering supply chain issues but is “working hard to return these items to the menu”.

McDonald’s is the latest to be hit by supply woes after Nando’s was last week forced to shut around 50 restaurants amid a chicken shortage. It blamed staffing shortages at suppliers and a reduced number of lorry drivers.

Nando’s reportedly closed nearly 50 restaurants on Tuesday, August 17, as well as cancelling all deliveries, leaving thousands of disappointed diners, with the famous chicken chain citing a lack of chicken, caused by the national shortage of lorry drivers, plus the impact of the ‘pingdemic’, causing staff to undergo ‘isolation periods’, and suppliers struggling to keep up with demand.

Firms across a raft of sectors in the UK have been battling with a supply chain crisis due to a shortage of lorry drivers following post-Brexit EU immigration rules, Covid-19 restrictions and self-isolation rules.

The crisis has affected supermarkets and other retailers across the UK, Ireland and some British supermarkets in Spain and France.