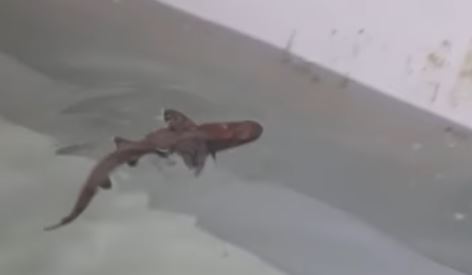 According to scientists the baby shark was born in a tank that only had female sharks inside, and it is a world first for the species. The baby is said to be a miracle. According to reports the tank in Italy’s Sardinia had only had two female smooth-hound sharks living in it for around 10 years.

Virgin births or parthenogenesis have never been spotted in smooth-hound sharks before, but they have been seen in nature in other species such as birds and reptiles. The birth occurred at the Acquario Cala Gonone aquarium in Italy.

The new baby shark has been called Ispera, and DNA tests will be carried out to confirm whether she is a clone of the mother shark.

The Acquario Cala Gonone aquarium took to Facebook to share the news and said: “The mother lives in the large pelagic tub with another female specimen. If confirmed by DNA analysis, it would be the world’s first documented parthenogenesis documented by Mustelus Mustelus. Ispera, the name chosen for the little one, in Sardinian means hope and a birth in the [COVID-19] era it certainly is,”

“One of the most common mechanisms that allow this type of reproduction is one where the egg is fertilized by another still immature egg cell, which actually acts almost like a sperm,”

“Parthenogenesis can be optional in species that normally reproduce sexually, as in some reptiles, fish and even birds, and could be favored in very low-density populations, where females have little chance of meeting their partner.”

They added that: “It would therefore be a scientific discovery of considerable interest since it could pave the way for research aimed at verifying how parthenogenesis is a process that the palombes use even in nature,”