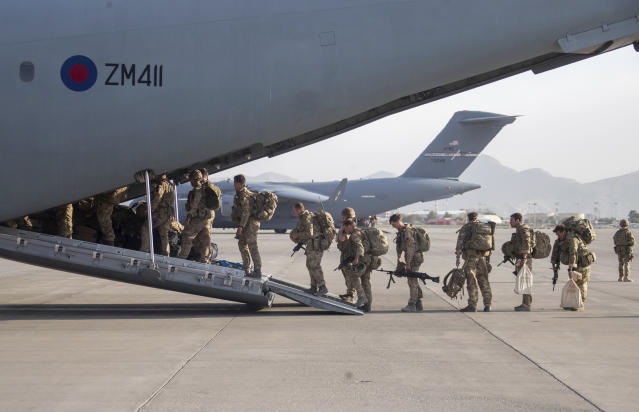 Downing Street has now confirmed that the final UK troops, diplomats and officials have all left Kabul in Afghanistan.

The departure of the last RAF flight from Kaul airport brings to a close the UK’s 20-year military involvement in Afghanistan. According to military reports, more than 15,000 people have been evacuated by the UK since 14 August.

Prime Minister Boris Johnson said the moment was a chance to reflect on the achievements of recent weeks – and the last two decades, such as girls’ education and weakening al-Qaeda.

In a letter to the armed forces community, Mr Johnson acknowledged the fall of Kabul to the Taliban will have been hard for them to watch.

He added it would be “an especially difficult time for the friends and loved ones of the 457 service personnel who laid down their lives” during the war.

The US Embassy in Kabul issued a warning of a ‘specific, credible threat’.

Following its warning on Saturday, August 28, that US citizens should “immediately” leave areas outside the Kabul airport gates, the US Embassy in Kabul issued another warning on Sunday, August 29, saying:

“Due to a specific, credible threat, all US citizens in the vicinity of Kabul airport (HKIA), including the South (Airport Circle) gate, the new Ministry of the Interior, and the gate near the Panjshir Petrol station on the northwest side of the airport should leave the airport area immediately.”

The US has been running the airport in Afghanistan’s capital, where a suicide bomb attack on Thursday may have killed as many as 170 people – including two UK citizens and the child of a British national.