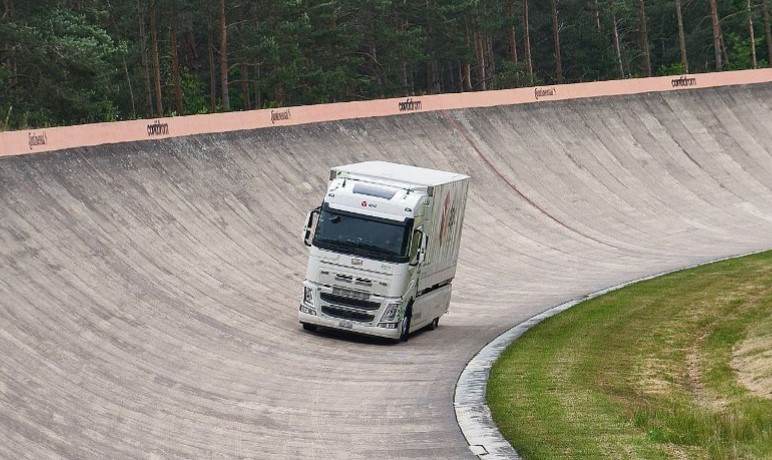 To break the record, a Futuricum electric lorry, equipped with the Continental brand tyres was used, that had already been in operation as a delivery vehicle for the private courier and parcel service provider DPD Switzerland for the last six months, proving that sustainable, energy-efficient, and cost-effective electric mobility in the transport sector is now a reality on European roads.

Adrian Melliger, managing director of Designwerk Products AG, the company behind the Futuricum brand, explained,  “For DPD Switzerland, we have turned a Volvo FH into an electric vehicle. The 19-ton truck now has more than 680hp, and, with a capacity of 680kWh, has the largest lorry battery in Europe on board”.

For this world record attempt, all three companies opted for Continental EfficientPro tyres, which are specially designed for particularly low rolling resistance, as Hinnerk Kaiser, director of Truck Tyre Product Development EMEA at Continental explained, “The rebound in electric mobility has brought even more attention to the importance of tyres optimised for rolling resistance”.

Adding, “Our tyres allow high mileage and extremely low rolling resistance, therefore, they offer the characteristics essential for the economic operation of commercial electric motor vehicles. The EfficientPro is a proven model that has been developed especially for long-distance transport, and focuses on range, and low rolling resistance”.

To give themselves the best chance of breaking the existing record, the team chose the high-speed oval of the Contidrom in Hannover, Germany, which is Continental’s in-house testing centre, a 2.9km long oval test track, where, to beat the record, two drivers completed a total of 392 laps of 4.5 hours each, at an average speed of 50kph, an acceptable realistic average speed for daily use.

Weather conditions were not the best, starting with an air temperature of 14 degrees, and around 23 degrees on the track surface, accompanied by a wind that blew at an average of 18kph, with gusts of up to 40kph, but, in just under 23 hours, the record was broken as the lorry completed 1,099km, without stopping to be charged, as reported by laopiniondemalaga.es.