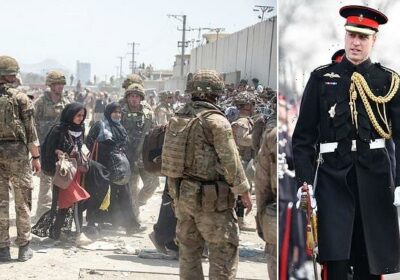 Prince William helps to evacuate Afghan family of officer he knew out of Kabul. image: Twitter

Prince William has intervened to help in the evacuation of the Afghan family of an officer he knew out of Kabul.

The Duke of Cambridge, Prince William, has personally intervened to ensure that an Afghan officer he knew from the Royal Military Academy, Sandhurst, was able to flee the country with his family unhindered by Taliban forces who now rule the country.

Earlier this week, Britain and America officially ended their military presence in Afghanistan with the final US troops flying out from Kabul’s airport.

And a night-vision image showed America’s Major General Chris Donahue, commander of the 82nd Airborne Division, boarding a military transport as the last US soldier to leave Afghanistan after 20 years of war.

According to The Telegraph, Prince William, 39, heard through the grapevine the former cadet was trapped in Kabul following the Taliban’s swift takeover and asked his equerry, Naval officer Rob Dixon, to contact personnel in the region regards evacuation for the family.

Following the intervention, the officer, who William met during his training at the military academy in Berkshire, and his relatives were able to get into the airport and safely board a flight back to the UK.

The officer is thought to have served in the Afghan army and worked closely with British troops, meaning he and his family would have been particularly vulnerable to reprisals.

This came as rebels entered the British Embassy in Kabul weeks ago and came across classified documents, somehow left behind by staff, containing details of interpreters and general ‘fixers’ who assisted UK and US forces during the Afghanistan campaign- leaving them all in severe danger of being shot or beheaded.

According to the report, all 10 of the family, including a number of women and children, were legally entitled to leave Afghanistan but had great difficulty navigating the hectic and dangerous route that led to the airport.

The Duke’s actions were immediately praised by former paratrooper Major Andrew Fox, who said the intervention was ‘fully in line with what we get taught in the Army in terms of values’.

‘I myself got 2 Para to rush out into the crowd and grab someone for me’, adding: ‘It’s fully in line with what we get taught in the Army in terms of values, loyalty, respect for others, all that good stuff. We’re trained to help where we can.

‘The situation was so chaotic and was so, frankly, mismanaged, that people would do whatever they could to get out,’ he told the newspaper,

‘The reverse would have been intolerable – that you might know someone was in dire straits, they might have appealed to you directly, but you did nothing. It’s an entirely reasonable thing to do. What none of us did was demand that anybody be on the first plane out. We simply made sure that they were registered in the system,’ he said.

Foreign Secretary Dominic Raab said evacuations may be able to resume from Kabul airport ‘in the near future’ as he expressed a need for direct engagement with the Taliban while holding a press conference in Qatar on Thursday, September 2. The Cabinet minister said his hopes were raised following the talks.

Mr Raab added that the UK will not recognise the Taliban in the ‘foreseeable future’ but said there is an ‘important scope for engagement and dialogue’.