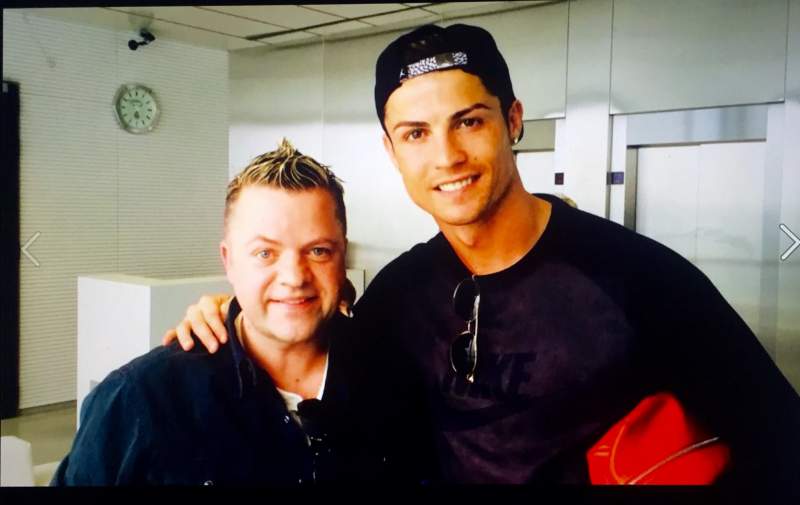 Cristiano Ronaldo’s eagerly awaited second Manchester United debut, for one fan in particular, is the fulfilment of a promise made to him by the five-time Ballon d’Or winner.

For almost two decades, Cristiano has presented Keith Norris and his children with many gifts, including several match-worn shirts. He has surprised Keith’s children, Alex and Marky, on their birthdays with meetings and signed shirts.

Norris, from Whitehead in Northern Ireland, is a season ticket holder and owner of the iconic fans’ flag, universally known as ‘United’s Big Lily’, which has travelled the world supporting the team since 1999.

Each year since Ronaldo left in 2009, Keith has presented United shirts to him and his son, Cristiano Jnr.
The friendship began when former assistant manager Walter Smith presented Keith with a signed Ronaldo shirt in 2002.

When Ronaldo moved to Real Madrid, Norris’s friend Pedro Chueca, whom he first met with Paddy Crerand on a trip to watch United play in Brazil in 2000, was Cristiano’s physiotherapist at the Santiago Bernabeu.

Norris and his United-supporting friends were regular guests in the Spanish capital, courtesy of Real Madrid personnel, including legends Raul and Hierro, having befriended them in Rio during the World Club Championship.

Each time Norris met Cristiano, he would sing ‘Viva Ronaldo’ and urge ‘Ronnie’ to return to Old Trafford. In 2015, Cristiano confided, ‘I promise, in the future, I will try.’
When at Real Madrid, Ronaldo presented Norris with several match-worn shirts. He sent a shirt to Greenisland Football Club, where Norris’s kids played, and to East Antrim Motor Factors in Carrickfergus, where Norris worked, to celebrate the company’s move to a new property.

Norris said, “Ronnie is a true gentleman. He has never forgotten his United roots and what the club and Sir Alex did for him. Like all United fans, this is a dream come true and for me, a promise fulfilled. Cristiano features in the upcoming “Flag of Friendship” documentary about the Big Lily flag. We’ve made him a Wee Lily tribute flag and look forward to presenting it to him soon.’

“There was no way he was going to City. Thankfully Sir Alex did the business with a call to his prodigy. I emailed Jorge Mendes: Dear Jorge, Under no circumstances let Cristiano join City.
He is loved and adored by us United fans. He will lose that in an instant if he does.
Get him to United. We are waiting with love for him.

“My first match was in 1979. It has taken 20 years plus to come down from the Treble season, and now Ronaldo has left many United fans very giddy in anticipation. There is nothing on earth like being a red,” Norris added.