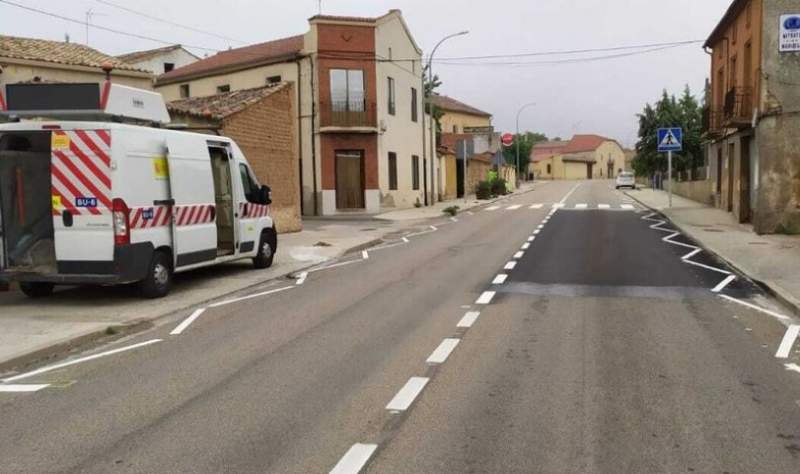 Installation of new experimental road markings on a section of Spain’s State Highway Network has begun today, Monday, September 6, with the objective, according to the Ministry of Transport, Mobility and Urban Agenda, of improving road safety through the use of a new system of ‘dragon’s tooth’ road markings, and broken edge lines.

Workmen started this morning, painting the new markings on the section of road that runs along the Nava de Roa crossing, on the N-122, between Km293,652 and 294,356, in the province of Burgos.

Through the Directorate-General for Traffic (DGT), the Ministry is drafting this new regulation on road markings, with the ultimate aim of improving road safety, and for now, it is intended to have an experimental section of two types of road markings included in the new standard.

A new road marking called ‘dragon’s teeth’ will be presented, which is designed to force drivers into significantly reducing their road speed with respect to the previous section, while at the same time adapting their speed and driving to match the different circumstances of the approaching section of road.

The second type of new road marking will be used to indicate when you are approaching a zebra crossing in the area, which will be preceded by a series of white, broken edge lines, designed to give drivers prior warning to be able to reduce their speed accordingly before reaching the zebra crossing.

The perception that one has of the road markings when driving on the road is clearly going to be very different from that obtained in the design shown in the diagram on a piece of paper, and in addition, the interpretation by each driver will undoubtedly be very subjective, which is why the objective of these experimental sections being installed today, is to check, prior to the incorporation of the new regulations, the effectiveness of the new markings, and the degree of perception and understanding by users, as reported by diariodesevilla.es.