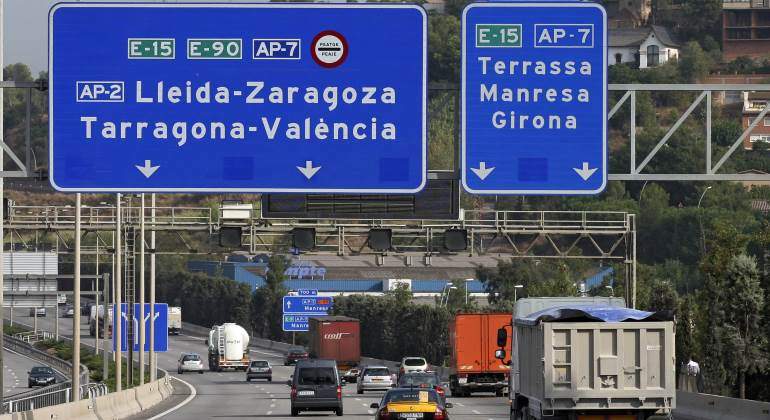 AFTER horrendous tailbacks on Catalonia’s first Sunday without tolls, the Government is studying the reinstatement of lanes to the AP-7 and C-32

On Catalonia’s first Sunday without tolls, the result was 31 kilometres of tailbacks on the AP-7, and already the Government is considering reinstalling additional transitory lanes on the AP-7 and on the C-32, to avoid more repetition of situations like this on weekdays and peak hours.

It is a proposal that has hastily been put on the table this Monday, September 6, in a meeting between the Servei Catala de Transit (SCT), and the new holders of the toll-free roads, after what was witnessed this last weekend on these roads.

This meeting though has reportedly not addressed the possibility that when there are retentions, of diverting traffic from the AP-7 onto the C-32, or of making the Garraf tunnel toll cheaper, or even making them free, an idea that the director of the Servei Catala de Transit suggested in a television interview.

Other measures that have been proposed are to promote up-to-date information to the user about the road situation, and to provide, when possible, alternative routes to those with delays, while another measure suggested to assess is an adjustment to the calendar of restrictions on heavy vehicles.

In addition, the concession companies have been asked to accelerate the works to dismantle the toll infrastructures in order to give more continuity to the capacity of the three lanes of the highway, and they have also been asked to open more toll booths to vehicles.

In addition to Lamiel and SCT technicians, Xavier Flores, the general director of Infrastructure of the Conselleria de Politiques Digitals i Territori, and Andreu Gonzalez, the head of the Traffic Division of the Mossos d’Esquadra, as well as representatives of Abertis and the Ministry of Development, reportedly took part in the meeting, as reported by elperiodico.com.