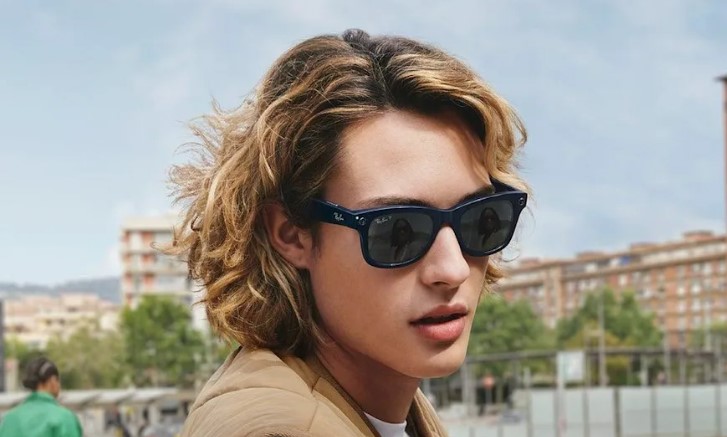 FACEBOOK has launched its new ‘smart glasses’, in partnership with Ray-Ban, that can take photos and videos of whatever the user is looking at

Marketed as Ray-Ban Stories, Facebook has finally announced its long-rumoured ‘smart glasses’, which have been built in partnership with sunglasses company, Ray-Ban, and will be available in 20 variations, including Ray-Ban’s Wayfarer design, a round design, and its Meteor design, although they are not waterproof, so should not be used in the rain.
With two front-facing cameras built-in, users can operate them by pressing a small button on the temple, which has the capability of snapping a 2592 x 1944 pixel photograph, or recording 30 seconds of video, with a voice-activated command of “Hey Facebook” also capable of operating the cameras.
Once an image or video has been captured, using a new app called ‘Facebook View’, it can be shared onto Facebook, Instagram, and other social media networks, with Facebook claiming the glasses, with a fully-charged case, will last up to six hours a day, for three days.
Users might have concerns over data privacy, with Facebook constantly being criticised for its lack of user’ data protection and privacy, and the debate over exactly how much data the company collects from people using its services, but they claim that Ray-Ban Stories will only collect data about the amount of battery used, the email and password of the users’ Facebook account, and other data including how many images or videos are made, and how long is spent making them.
Facebook claims it designed these glasses with “privacy in mind”, which includes a small LED light that illuminates when the cameras are activated, shining white, but, it would seem an easy job to cover that warning light over with tape or similar, so that nobody knows the user is recording them, or taking their photo, although the company says doing this would violate the terms of service, but, how would they know if it was done?
“Like any new technology that enters the market, there will unfortunately be instances where people will look to use the glasses inappropriately”, says Facebook, who have “published a set of tips that advise people on how to use the glasses safely and respectfully, to protect themselves and others around them”.
These ‘tips’ include “encouraging users to respect people’s preference on whether they wish to be in a photo or video”, although one must wonder what effect that would have, when it seems commonplace for people to simply upload photos and videos online irrelevant of who might happen to be in them, and without their consent.
Priced at £299 and at the equivalent prices in the United States, Italy, Australia, and Canada, Ray-Ban Stories will be available on 9 September 2020, as reported by uk.finance.yahoo.com.