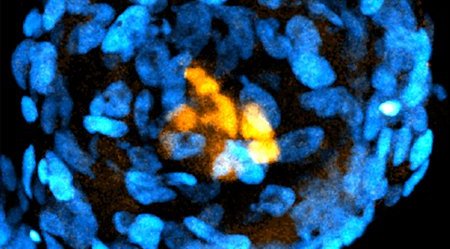 Researchers have discovered how to build embryo-like structures from human stem cells. The technique is an alternative to using donated embryos resulting from IVF.

Researchers in California have created embryo-like structures out of human stem cells. In contrast to natural embryos that are formed by a combination of sperm and egg, these structures are formed by combining so-called pluripotent stem cells, which have the ability to develop into specialized types of cells. Though these embryo-like structures have some key differences from real embryos, the technology to create them will be critical in answering open questions about human development without the need for donated embryos.

The structures are made from a type of pluripotent stem cell that gives rise to distinct types of cells that then self-assemble into a structure with morphology clearly reminiscent of that of an embryo, which has distinct embryonic and extra-embryonic tissues. The pluripotent stem cells were initially isolated from a real human embryo by other researchers and have since been maintained in a laboratory environment. Remarkably, the cells can still “remember” how to assemble into an embryo when supported by the right environmental conditions.

“The ability to assemble the basic structure of the embryo seems to be a built-in property of these earliest embryonic cells that they are simply unable to ‘forget,'” said Magdalena Zernicka-Goetz. “Nevertheless, either their memory is not absolutely precise or we don’t yet have the best method of helping the cells recover their memories. We still have further work to do before we can get human stem cells to achieve the developmental accuracy that is possible with their equivalent mouse stem cell counterparts.”

The ability to generate embryo-like structures from stem cells means that additional donated embryos are not needed; in addition, the structures can be created in large quantities. Thus, this model system may lead to breakthroughs in the understanding of early embryonic development that are not constrained by the limited availability of human embryos. For example, it will be possible to perturb particular genes and study the resulting impact on the developmental process. Additionally, this system can be used to understand how different cellular components coordinate their development at very early stages and the impact of this cellular cross-talk upon later developmental stages.

The research was conducted in the laboratory of Magdalena Zernicka-Goetz, Bren Professor of Biology and Biological Engineering at Caltech, and is described in a paper appearing in the journal Nature Communications on September 21.