La Palma volcano reaches its most explosive phase yet 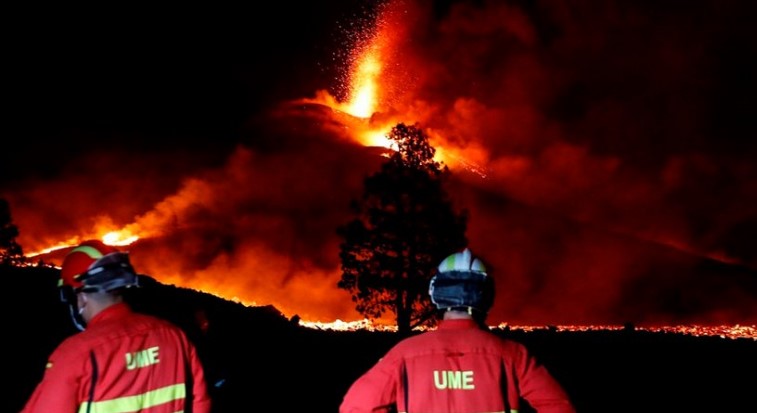 Today, Tuesday, October 5, the La Palma volcano reaches its most explosive phase yet.

In the early hours of this morning, the lava flows from the eruption of La Palma volcano have been activated again, although they have been “more vicious”, and the activity has been “more strombolian and less effusive, with a large emission of pyroclasts that continue to change the cone morphology.”

The blasts have also been reaching up to 800 metres away, explained the seismologist of the National Geographic Institute (IGN), Itahiza Domínguez.

The partial collapse of the structure of the cone has caused a greater flow of lava that, at the moment, runs above the primary lava.

The authorities are monitoring it very closely because it “could deviate” and affect new areas if new sources of lava open or the lava thickens.

Experts do not rule out the appearance of new lava emission sources or an increase in explosive activity.

Seismic activity continues to increase. Last night the IGN registered more than thirty earthquakes, the one with the highest magnitude of 3.9 was located in Villa de Mazo at 4:36am and 38 kilometres deep.

Also in Mazo, another earthquake of magnitude 3.4 was located which was 37 kilometres deep and felt by the population at 5.18am. The increase in seismic activity, according to experts, shows no indication at the moment that a new mouth is going to open.

After 16 days, the area affected by the eruption amounts to 413.38 hectares and the perimeter of the affected area is 36.3 kilometres, although it is expected that not all of this area is washed away by lava.

The width of the stream in some sections is 1,250 metres while the strip that was created when the lava fell into the sea already has an area of 32.7 hectares.

There are already around 1,100 buildings affected.