Murcia hospital reports a girl’s homosexuality as a ‘current disease’ 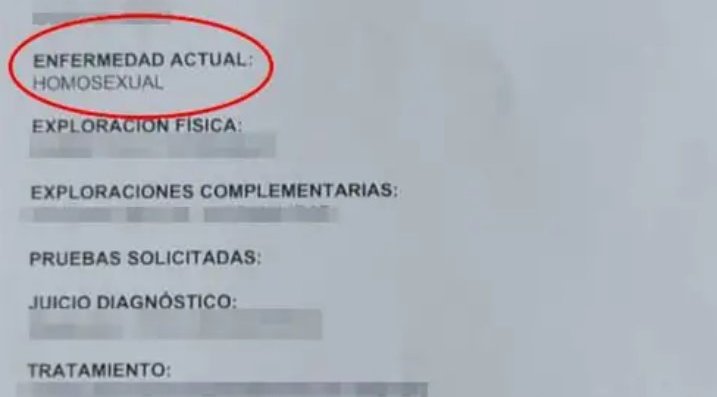 A hospital in Murcia has come under fire from the LGTBI association Galactyco in Cartagena, after a 19-year-old girl received her gynaecological report which stated that her homosexuality was a ‘current disease’.

The young girl, from the Murcian town of Llano de Brujas, noticed this listing when she received her report on October 4 from the Reina Sofia hospital. In a statement from Galactyco, they pointed out that the World Health Organization (WHO) had removed homosexuality from the list of mental illnesses back in 1990.

A spokesperson commented, “However, 31 years later, in the Murcian health system, some professionals continue to assume sexual orientation as a disease”. They added that homosexuality had for centuries been a reason for, “stigmatising, discriminatory, violent, and degrading behaviour towards all people whose sexual orientation was different from heterosexuality”.

They publicly denounced the hospital and its staff for the “manifest ignorance with lgtbiphobic overtones, that involves relating sexual orientation with disease”.

In addition, they denounced the regional Executive and, specifically, the Ministry of Health, for ‘institutional neglect’. They claim that the entity did not apply Law 8/2016 of May 27, on the social equality of lesbians, gays, bisexuals, transsexuals, transgender and intersex, and public policies against discrimination, based on sexual orientation and gender identity in the Community, “which after 5 years passed remains as a legislative adornment”.

Two letters have been sent to the Ministry and the Murcian Health Service by Galactyco, demanding immediate rectification and apologies to the patient. The letter reportedly includes a demand that the aforementioned Law be applied.

In health matters, this law commits the Government of Murcia to guarantee respectful treatment towards LGTBI people, since health professionals have adequate training and information on homosexuality, bisexuality, transsexuality and intersexuality.

“There are already numerous cases of humiliating treatment that come to our Association due to sexual or gender orientation”, reported the Association. It is considered, “alarming, unacceptable, and intolerable, that to date the professionals on whom an adequate treatment of our health relies, ignore the realities of LGTBI people”, they claim.

The Reina Sofia hospital management has said it “deeply regretted” the error made in the medical report by the gynaecologist. After learning the facts, the health centre has started procedures to rectify the patient’s medical history, as well as contacting the patient to apologise personally.

According to Efe, the hospital’s press office informed them that, “This afternoon we have spoken with the patient to apologise and tomorrow we will deliver the rectified report”, as reported by larazon.es.