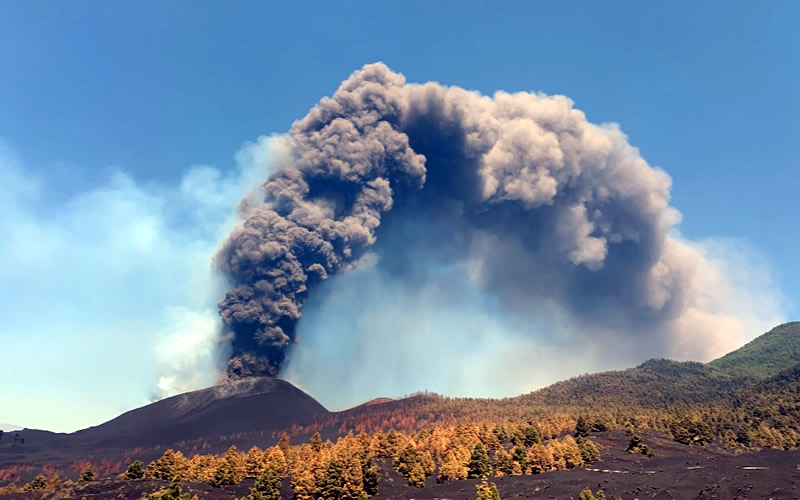 Toxic air on La Palma causing a problem for residents

According to information from the Volcanological Institute of the Canary Islands (Involcan), the high emission rates of sulphur dioxide (SO²) on La Palma indicate that the completion of the eruptive process is not close to completion.

Optical sensors in a Guardia Civil patrol boat were used on Thursday, October 7, to measure the levels. It was estimated that around 13,100 tons of SO² had been discharged into the atmosphere so far, since Cumbre Vieja erupted.

It was reported by several residents that they woke up to the smell of “rotten eggs”, which is the obvious aroma given off by this gas. The Pevolca Steering Committee and the Scientific Committee had already warned during their press conference on Wednesday about the worsening weather conditions and about the possible arrival of the ash cloud to other areas of the island.

As one of the technicians present from the Scientific Committee pointed out, the air quality is lower than yesterday, as expected. He added that this gas can not affect people, unless they have a weak immune system. In such cases, they should not leave their homes right now, and should wear an FFP2 mask as a precaution.

These meteorological conditions will probably continue until Saturday 9 said the technician, and will affect the operation of La Palma airport.

Pevolca also confirmed that the lava stream continues to flow through the main road without showing an increase in width or new forks. In total, there are 431.2 hectares of surface, and 26.47 kilometers of road affected, the majority in the municipality of Los Llanos de Aridane.

The lava is now flowing through a volcanic tube

Maria Jose Blanco, a spokesperson of the Scientific Committee, on behalf of the National Geographic Institute (IGN), explained that lava continues to pour onto the new delta – or fajana –  that has formed. It is now running through a volcanic tube that runs from the cone to the ocean.

This is good news, because when the lava moves through this type of tube, it does not affect any more homes and land. It also prevents the lava from damaging the sides of the consolidated casting. As it nears the coast the stream has split into another fork, which is subsequently destroying banana farms and some homes, and threatens the disappearance of the well-known Los Guirres beach, as reported by larazon.es.