Strongest La Palma earthquake of 4.8 is felt in the north of Tenerife 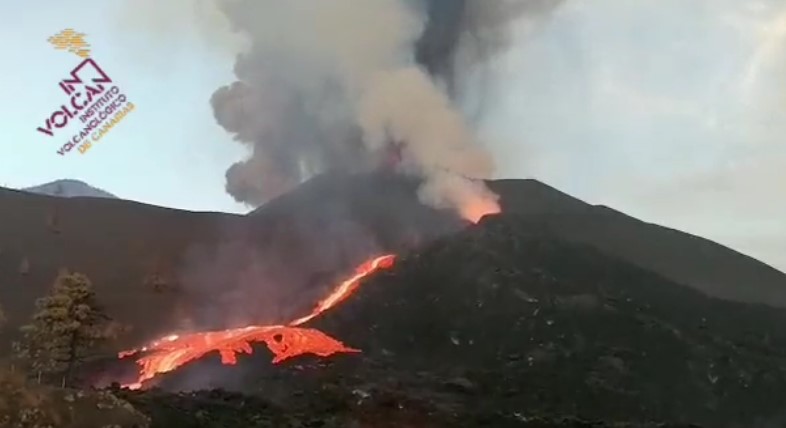 Strongest La Palma earthquake of 4.8 is felt in the north of Tenerife. image: twitter @involcan

Strongest La Palma earthquake yet, of 4.8 magnitude, was felt in the north of Tenerife

According to the National Geographic Institute, an earthquake measuring a magnitude of 4.8 on the Richter Scale shook La Palma this Tuesday evening, October 19. It was recorded at 10.48pm local Canarian time, and is the strongest quake yet since the Cumbre Vieja volcano erupted one month ago.

Its epicentre was registered in Villa de Maso, at a depth of 39km. Until this one, the strongest tremors had been two, both during the last three days, of 4.6 magnitude. This latest seismic activity had an intensity of V, on a scale that reaches VII. It was felt not only on La Palma, but as far away as several locations in the north of Tenerife.

It is unsure what will become of the lava stream that has already destroyed a part of La Laguna, as it has reached uneven terrain that could possibly channel it towards the other fork that was reportedly already less than 100 metres from the ocean at 11pm on Tuesday evening.

Moving at a slow speed of between five and ten metres per hour, it would inevitably reach the Atlantic in the next 24 hours. If the stream continues its present course then it will pass directly through the centre of the municipality of La Laguna. As a precaution, La Laguna residents have already been evacuated.

Miguel Angel Morcuende, the technical director of Pevolca, the Canary Islands Volcanic Emergency Plan, says that the first scenario is the “ideal scenario”, to avoid more destruction of property, businesses, and infrastructure.

Director of the National Geographic Institute (IGN) in the Canary Islands, Maria Jose Blanco, who is also a member of the Pevolca Scientific Committee, reiterated on Tuesday that one thing they are sure of is that the end of Cumbre Vieja is still “far away”.

According to the latest update of the Copernicus satellites, 1,956 buildings have been destroyed since the beginning of this crisis. Lava already covers 811.8 hectares of the island, as reported by 20minutos.es.