Eleven arrests in Malaga for smuggling drugs hidden among cauliflowers 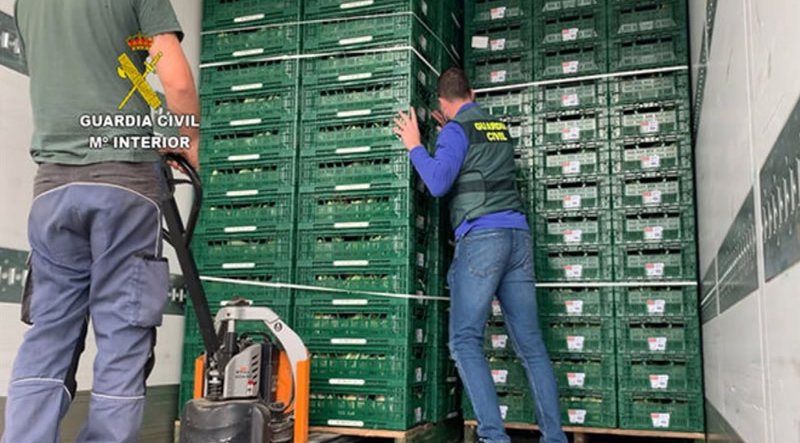 Guardia Civil officers in Malaga have dismantled a gang dedicated to transporting large quantities of drugs hidden among tons of cauliflowers. These lorry loads of marijuana and hashish were brought into the province inside vehicles originating from various European Union member states.

According to a statement from the force, ‘Operation Torcal 131-Guadalciro’, was launched at the start of 2020. This operation was initiated after officers had discovered the purchase of large quantities of marijuana and hashish by certain individuals in Malaga. Eleven arrests were made as a result.
After the products arrived in Malaga, they were stored out of sight in a warehouse on an industrial estate. To avoid detection, it was hidden among legal merchandise, mainly fruits and vegetables, ready to later be transported to European countries.
One such lorry, transporting more than 16 tons of fresh cauliflower was intercepted by Guardia Civil officers as it was leaving Malaga province. Hidden among the vegetables they discovered 142 kilos of marijuana, and the driver was subsequently arrested. The seized cauliflower was donated to the Food Bank of Malaga.

Four searches were then carried out in homes, and two industrial warehouses in the Malaga province locations of Malaga, Marbella, and Estepona. During these searches, ten vehicles were seized, along with €92,000, 7,500 in Swedish Krona, 4,230 Swiss Francs, large quantities of high-end jewellery and watches. Equipment for packaging and transporting the drugs was also found. Four international arrest warrants were also issued.

In one of the registered warehouses, investigating officers found 178 tons of marble with a value of more than four €4 million. All this material has been seized by court order, as reported by malagahoy.es.