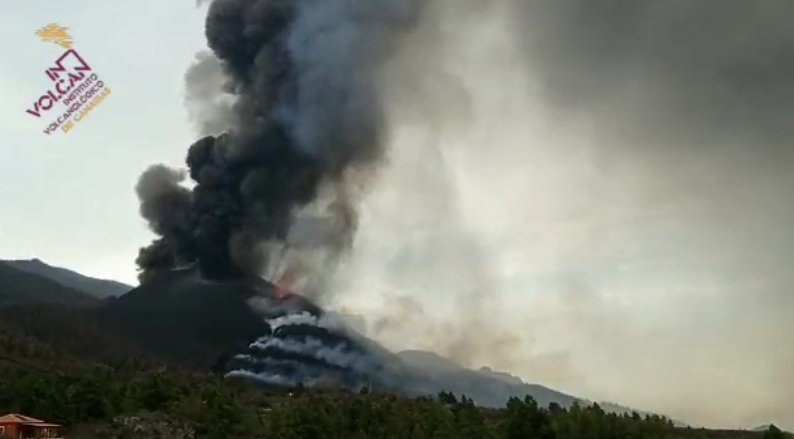 Residents on the Canary Island of La Palma have faced more heartbreak as one of the streams of lava entered the town of La Laguna on Wednesday, October 20. Today, Thursday 21, ariel drone footage showed that the school in the centre of the town has been totally destroyed as the mass keeps advancing.

The local fire station is reportedly surrounded by lava and looks likely to become another casualty. Scientists and the authorities are hoping that the stream will turn southwards and avoid the rest of La Laguna and its banana plantations. Should it decide to flow northwards from La laguna then the town of Tazacorte is in danger.

As a precaution, last night, another 500 residents were evacuated from their homes in the plains of Tazacorte and Los Llanos de Aridane. This brings the total number of evacuees to 7,500 since Cumbre Vieja started erupting on September 19.

According to data from the National Geographic Institute, seismic activity is said to have increased on the island today, with 38 tremors being recorded since last midnight. Maria Jose Blanco, the scientific spokesperson for Pevolca, reported that the number of events in deep seismicity has decreased, but their magnitude remains high. She explained this is worrying because there could be earthquakes of up intensity 6.0 magnitude.

It has also been confirmed to Cadena Ser by the Emergency Coordination Centre that a body has been discovered in Camino Rodrigo, located in Los Llanos de Aridane. No information has been revealed as yet, but the Guardia Civil are in attendance, along with the judicial police. They are waiting for the arrival of a judge to proceed with the removal of the body, as reported by cadenaser.com.