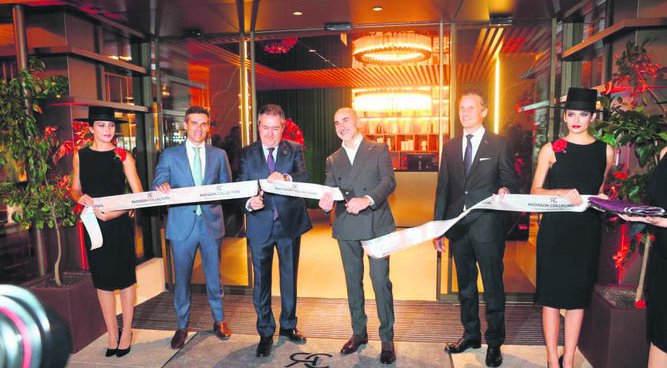 Radisson has opened its first five-star hotel in Sevilla Spain.

The inauguration of the establishment to the hotel sector of the city reinforces the commitment to premium tourism in Sevilla, a strategy that the city council is pursuing with conviction as it is the type of visitor that it is interested in attracting to improve the quality of this industry.

The mayor of Sevilla, Juan Espadas, and the municipal delegate for Urban Habitat, Culture and Tourism, Antonio Muñoz, accompanied the president of the Radisson Hotel Group, businessman Chema Basterrechea, at the official opening ceremony of the hotel, led by Olivier Rust. The hotel chain has made an important bet with this new business, which has also included the redevelopment of the central Seville square.

Some two hundred and fifty guests from across the civil and institutional societies of Sevilla, together with the national and international press, gathered at the new hotel to witness the opening, which provides a concept of luxury that did not exist until now in the capital.

A surprise on the night was a show by Jaime de la Puerta, who danced on horseback with Rocío Suárez to the sounds of the Sevillanas performed on piano by Joaquín Pareja Obregón.

Food was provided by two high-level gastronomic chefs: Justa and Rufina, who are from a restaurant managed by the Azotea group. Radisson Hotel Group said it plans to open 25 hotels in Spain by 2025.