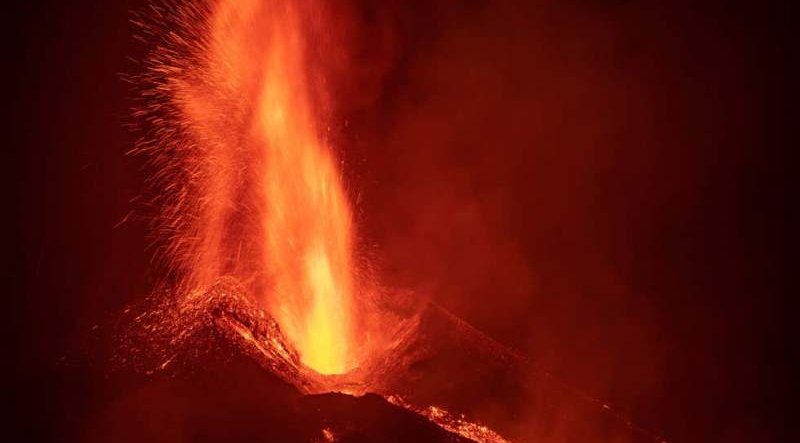 The latest news coming out of La Palma is disturbing as the volcano enters its 34th day of activity on Saturday. The Volcanological Institute of the Canary Islands has reported a partial collapse of the main core of the La Palma volcano. At the same time, the National Geographic Institute (IGN) reported that the secondary core has suffered several lava overflows in the last hours.

Explosive activity continues. Volcanic Ash Advisory Center (VAAC) Toulouse has been warned about a volcanic ash plume that rose up to an estimated 8000 ft (2400 m) altitude or flight level 080 and is currently moving at 10 kts in SE direction.

Above: EMSC Earthquake map today – ‘these are not natural earthquakes happening in La Palma.’

These circumstances have coincided with the visit of the President of the Government, Pedro Sánchez. The Prime Minister announced today, Saturday, October 23, that the Council of Ministers will next week approve measures to provide coverage to the self-employed on La Palma and expedite the distribution of emergency aid for those affected by the volcanic eruption.

Sánchez thanked the presidents of the Government of the Canary Islands, Ángel Víctor Torres (PSOE), and of the Cabildo de La Palma, Mariano Hernández Zapata (PP), and the mayors of El Paso, Los Llanos de Aridane and Tazacorte for their combined efforts.

According to Itahiza Domínguez, from IGN, the latest news about the eruptions reflects that “the dynamics are changing”, so as the day progresses it will be possible to know with greater certainty what to expect later.

The scientific committee has advised the Volcanic Emergency Plan of La Palma (Pevolca) that the Strombolian eruptive process is characterised by a constant variation of the core, or the cores in this case, and that new environmental points of attention could arise from the main eruptive center.