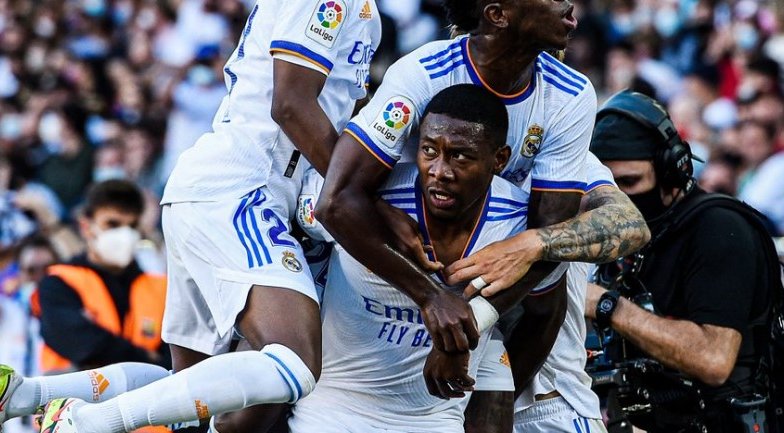 Real Madrid travelled to the Camp Nou in Barcelona this afternoon for the first ‘El Clasico’ of the new LaLiga season, played in front of 86,000 fans. Both teams lacked familiar faces from previous contests, most notably PSG pair, Lionel Messi and Sergio Ramos, the first time since 2004 that this legendary pair had not been present for one of these high-profile meetings.

A 2-1 victory for Los Blancos sends Carlo Ancelotti‘s men to the top of LaLiga for the moment, leaving Ronald Koeman with a huge dilemma as his team languishes in eighth spot in the table.

David Alaba repaid some of the money invested to bring him from Bayern Munich as he opened the scoring with his first goal for Madrid. The defender started and finished a move that began on the edge of his own penalty area. Rodrygo provided the final pass for Alaba to smash his shot into the corner of the net beyond Marc-Andre ter Stegen on 32 minutes.

Everything looked set for a 1-0 result when suddenly, there were two goals in added time. Lucas Vazquez doubled the lead for the visitors in the 93rd minute. He will probably never net an easier goal after tapping in the rebound after Ter Stegen had parried Marco Asensio’s shot.

Then, in the 97th minute, former Manchester City legend, Sergio Aguero got his first Barca goal. In what was only their second attempt on goal for the whole match, the Argentine buried a cross from Sergino Dest in the back of Thibaut Courtois’s net with the last kick of the game.

This was Madrid’s fourth Clasico victory in a row, and it has surely ramped up the pressure on an already under-fire Koeman.