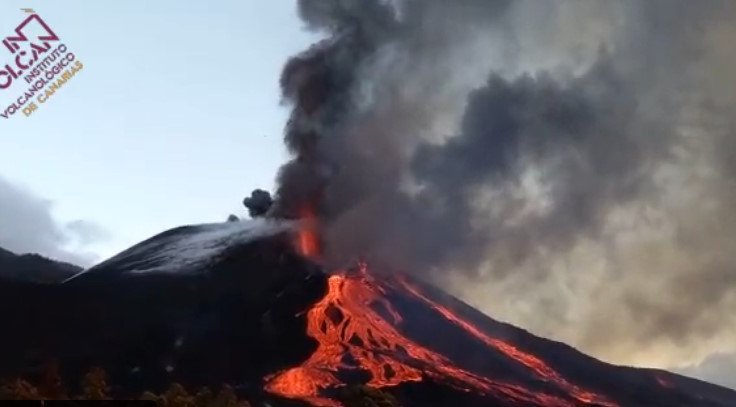 The remainder of the Cumbre Vieja volcano cone has collapsed this afternoon, Monday, October 25. This movement has sent streams of molten lava out in all directions. It has also caused landslides, along with four erupting mouths all spewing volcanic material up into the sky.

This collapse occurred at around 7.45pm local Canarian time. David Calvo, a spokesman for Involcan, the Volcanological Institute of the Canary Islands, said, “We are in the moment of more activity”. Another section of the cone had come away earlier, at around 2.45pm, forming a new mouth on the flank of the volcano.

The earlier partial collapse caused lava overflows to head in the direction of the Tacande area. Luckily for residents in the Corazoncillo area, the new stream that broke out last Saturday 23 has slowed down and “has practically not moved since yesterday”, explained the experts.

Lava from the fissures under the main cone of the volcano is running mainly through the line of the original stream. It has reached the sea, forming a strip, which has grown in recent hours. This greater flow of lava from the stream that devastated the Todoque neighborhood has destroyed the homes that had been left undamaged, especially in the Alcala area.

Calvo described the emission of gases that the volcano is emitting as “nonsense”, referring to the absurd amount of an estimated 53,600 tons of sulphur dioxide that has been thrown up into the atmosphere. Experts have also warned of an increase in tremors, and that it is possible that quakes of up to 6.0 magnitude could occur.

Throughout today there have been 274 tremors recorded, with a huge increase in seismic activity, including several sonic booms, as reported by 20minutos.es.