All the up-to-date news and scores from Walking Football 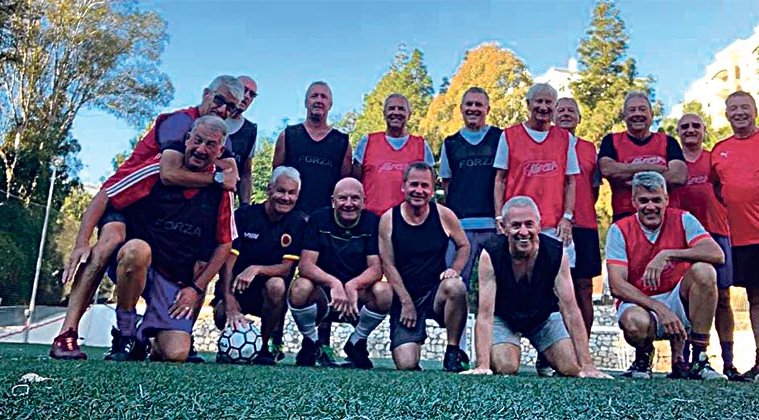 The victorious Calahonda squad at a session before their match with the Walking Dead.

CALAHONDA had struggled in their first League game at Viñuela. The Walking Dead B had slaughtered Sporting Benahavis 8-1. However, personnel changes helped produce one of the biggest upsets in South of Spain walking football history.

People had wagered their mortgages, well not quite, on a similar score when these two met on Monday October 18. However, the Whites shocked everyone taking the lead before Walking Dead B equalised shortly after. This did not deter Calahonda who continued their passing game and their solid formation to take the lead again with 10 minutes to go. A third followed to put the game out of reach.

A shock but deserved win for the Whites and sportingly taken by a disappointed Walking Dead team. Their management team pointed to several forced changes from the team who beat Benahavis while Calahonda manager Lesh Bzruzny said he was proud of his team who pre-match were odds on underdogs, and the way they had stuck to their game plan. The match was well controlled by referee Ian Flynn with no incidents of note.

In other matches last weekend Benahavis’s teams made the long trip to Nerja determined to wipe out the eight goal defeats both their teams had suffered from the Walking Dead.

Atletico Benahavis were first on and recorded a 5-3 win against Nerja A. Sporting Benahavis then saw off the Nerja B team challenge with a 3-0 win.

With all teams having played two games the Championship Table is very close with Viñuela leading on 6pts followed by four teams on 3pts and Nerja B bottom still to gain a point.

On Wednesday October 28 saw the long awaited encounter between Malaga A, second in the HIDROMASTER Premiership, against also unbeaten with a game less played Walking Dead. Always tight evenly contested games between these two. Malaga are confident after getting to the semi-final of the Over 60s Algarve Tournament where they lost after ‘running out of steam’ and the Walking Dead on a high after scoring eight goals in their last match at Benahavis. See next week’s Euro Weekly News for match report and other results.

WFAI NEWS. Clubs and individuals wishing to stand for one of the committee posts should submit their application before Sunday October 31 to [email protected]

WFS Calahonda are running a Penalty Shootout Competition after each session at the Finca Naundrup as part of their contribution to Lara’s Fund. At last Monday’s shootout Lara’s Dad Johhny Gracie took part. To read how he fared against ‘The Professionals’ make sure you get your copy of next week’s Euro Weekly News.

The proceeds of a raffle which will be drawn at the Calahonda Christmas Dinner Dance will also be donated to the fund.

FINAL COMMENT. The Benalmadena member who took ill while playing in the walking football session at the Polideportivo last Monday has left hospital and is now slowly recovering at home. He sends his thanks to all who asked after him and to the colleagues and medical staff who saved his life.