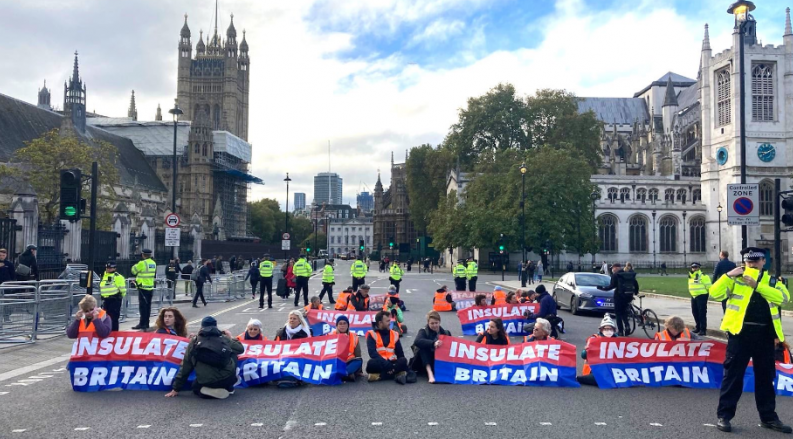 MPs were trapped outside Parliament due to Insulate Britain protesters. Image - Twitter

Insulate Britain protesters have caused more disruption in London by blocking two major roads in Parliament Square and blocking the entrance to the Houses of Parliament.

Insulate Britain protesters have caused yet more disruption in London by blocking two major roads in Parliament Square and blocking the entrance to the Houses of Parliament today, November 4.

In the latest round of protests, the protesters have glued themselves to the road while other hold banners.

According to reports, 62 activists sat on the ground and blocked the Peers’ entrance to the Houses of Parliament. Around 30 of them also glued themselves to the floor.

Social media footage shows one protester climbing on top of a police van while holding an Insulate Britain banner, with another glueing his hand to the vehicle.

Some Tory MPs were unable to enter Parliament to participate in transport questions as they were “trapped outside” because of the protests.

Commons Speaker Lindsay Hoyle said it is “totally unacceptable” that Insulate Britain are “interfering with democracy” and it is a “tragedy” that two Tory constituents of Broxtowe and Windsor will not be represented.

He said: “The fact that people are actually talking about the same issues and being blocked from doing so is totally counterproductive.”

Transport Secretary Grant Shapps said Insulate Britain’s actions were “completely unacceptable” and that 475 injunctions have been sent to protesters homes for contempt of court.

32 of the activists are due to appear in court, while nine will appear later this month.

Police have resorted to the drastic and time-tested tactic of ‘asking them nicely to stop’ pic.twitter.com/GZdcSjXiYU

Over 800 people have been arrested so far in association with the group’s protests, which calls for the government to insulate all UK homes by 2030 to cut carbon emissions.

He warned: “Contempt of court can lead to unlimited fines, and prison sentences. And we will be acting where the law has a gap in it through the Police and Crime Bill to resolve the gap that has led to this.”

A Protester who was glued to the pavement today said getting a fine is a “walk in the park” if you compare it to the climate crisis.

The protester, Paul Sheeky, said: “The death and destruction that is on its way unless we tackle this issue is just beyond imagining. A slight discomfort now is a small price to pay for saving lives in the future.”

“We have been out on the road now for several weeks and a lot of the time the drivers say to us ‘this is not the right way to be doing this, go to Parliament, protest there.’”

“We thought we would take that advice and give it a go.”

“We know from protesting in Parliament in the past it doesn’t work, which is why we have to protest on the roads, but we thought we would come here altogether as a show of unity just to say, yes we are going to keep going.”

The protests have been causing disruption since September and caused misery to drivers when they took to the M25, causing huge queues in rush hour.

Peter Anthony-Gord, a bus driver who was waiting almost 35 minutes this morning, said: “I don’t think they are doing this properly. I really think there is a better way to do this.”

“There are ways of insulating Britain which you can do with other sources, other people, companies, private finance etc rather than causing absolute chaos in London. This is not going to insulate one home sitting here.”

Another member of the public caught up in the group’s protest said: “It is just getting ridiculous now. Every other week there is some sort of protest and now they glue themselves to the floor.”

Earlier today, the group published a statement about their protests hailing them “one of the most successful campaigns in history.”

“Our name recognition went from zero to 77 per cent of the public in three weeks, we have attracted enormous media interest and we have started thousands of conversations, in the press, on social media and in homes up and down the country,” it said.

“Importantly, we have exposed the government’s refusal to act on home insulation as cowardly and vindictive and their refusal to protect our country and our children from the climate crisis as genocidal and treasonous.”