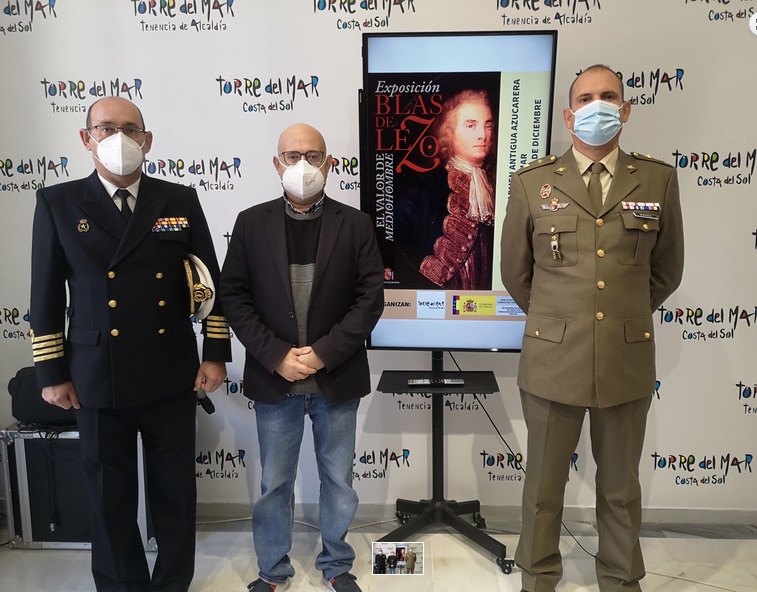 Torre del Mar pay tribute to Blas de Lezo by organising a number of events next Thursday, November 18. Taking part in the events will be the Ministry of Defence, the sub-delegation of the Ministry of Defence in Malaga and the Spanish Navy.
The First Deputy Mayor of the City Council of Vélez-Málaga, Jesús Pérez Atencia, together with the Naval Commander of Málaga and Captain of the Navy, Ignacio García de Paredes; and the Army Lieutenant Colonel, Enrique Serichol López, will present the events that will take place in Torre del Mar in tribute to Blas de Lezo.
Pérez Atencia said that “the link between the town of Torre del Mar and the municipality of Vélez-Málaga will be endorsed next Thursday with a solemn act that will consist of two parts. In the first place, in the area of ​​the promenade where the statue of Blas de Lezo is located, installed in 2018, an act will be held in tribute to this Spanish hero. It should be remembered that Blas de Lezo fought one of his great battles in front of the Torre del Mar bay, known as the Naval Battle of Vélez-Málaga ”.
The mayor reported that “the event will be chaired by the Naval Commander of Malaga, Ignacio García de Paredes, and the deputy delegate for Defense in Malaga, Eduardo Llorente Erroz. The Marine Corps picket ‘Tercio Sur’ based in San Fernando; and the Marine Infantry picket of the patrolman Tagomago will also be present. A a solemn lowering of the flag and tribute to the fallen will also take place ”.
The deputy mayor of the municipality pointed out that “in the act itself will pay tribute to Blas de Lezo and will inaugurate a series of historical murals in which the Velez-Malaga naval battle itself is reflected and that will remain permanently on the seafront. These are the work of Pierre Lachnowicz in collaboration with and under the supervision of the technician of the cultural area of ​​the Vélez-Málaga City Council, Emilio Martín Córdoba ”.
Secondly Atencia continued, “in the building of the cultural centre of Our Lady of Carmen – Antigua Azucarera, we will hold the opening of the exhibition ‘Blas de Lezo, the value of the half-man. It is an international exhibition that praises the figure of Blas de Lezo, lieutenant general of the Spanish Navy ”.
The mayor concluded by thanking “the Ministry of Defence, the sub-delegation of the Ministry of Defence in Malaga and the Spanish Navy for their willingness to carry out these acts and offer us all their support. It must be remembered that Torre del Mar, today, is one of the few towns in the world that has a sculpture by Blas de Lezo ”.
For his part, the Army Lieutenant Colonel, Enrique Serichol López, spoke about the exhibition that will take place to pay tribute to Blas de Lezo after the act of the Paseo Marítimo at the Nuestra Señora del Carmen Antigua Azucarera Cultural Centre where “the Defense Sub-delegation is involved to bring society closer the figure of Blas de Lezo. In this way, we want to fulfill the objective of spreading the culture of defence through this type of exhibitions and other events, which we understand are vital for us to bring the knowledge and values ​​of the Armed Forces to society.”