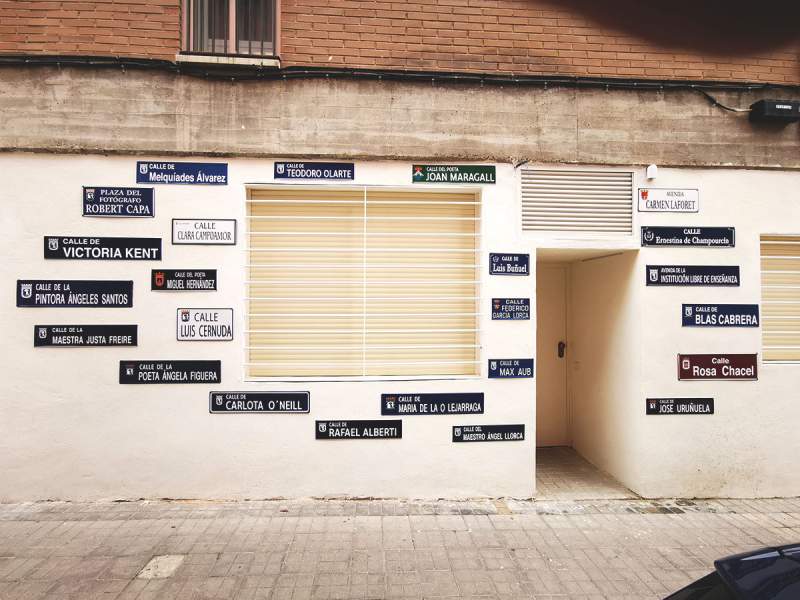 Madrid City Council has ordered the removal of political street art that has divided opinion since it was erected 11 months ago. The piece called Fachada derecha – Fachada izquierda, or Right Facade – Left Facade, is an installation by Mateo Maté and was intended to be a conversation starter on contemporary society and nationalism. The art itself has become the controversial talking point, however.

On the left wall, 24 plaques commemorating poets and writers such as Frederico Garcia Lorca, Carmen Laforet and Miguel Hernandez are posted. On the right wall, there are 25 more that honour right-wing names like Francisco Franco, General Emilio Mola, and General Jose Millian-Astray, the founder of the Spanish Legion. Each wall has a QR code that people may scan to read detailed biographies of everyone featured.

Madrid City Council has decided to remove the plaques after almost a year, stating that the proliferation of signs is confusing and that it alone has the power to decide what the streets are called.

The work reflects the deep division within Spanish politics and the removal of political street art comes as the Socialist government of the country has put forward a motion to amend a law that would allow them to prosecute Franco-era crimes. The coalition has said the measures will “bring an end to Francoist impunity”, but the opposition right-wing People’s Party (PP) has accused the proposed amendments are simply looking to divide the country.

The divide has become clear during the artwork’s tenure in East Madrid. One of the tenants on the ‘right-wing’ side of the wall has been harassed although she has nothing to do with the artwork, and some of the names of the generals have been painted over. Posters depicting Carlos Palomino, a 16-year-old anti-fascist who was stabbed to death in 2007 while on his way to protest against a neo-nazi rally, have been placed over some of the plaques.

“The work was to see whether our democracy was genuinely mature and whether we could talk about all this,” said the artist, Mateo Mate. “The answer seems to be no.”