Please pray for the people of La Palma 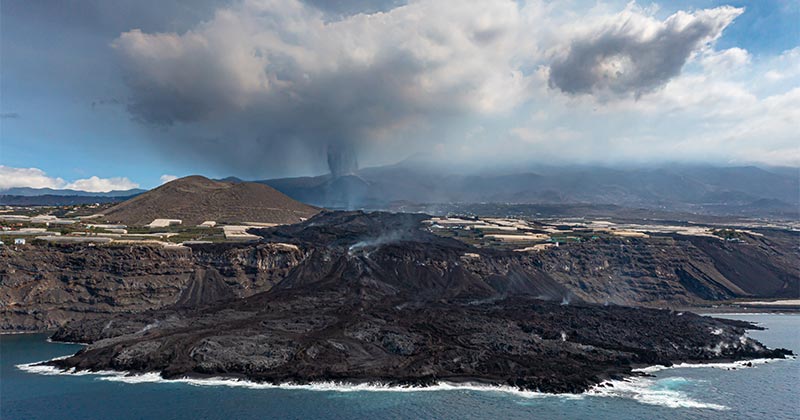 This is all minimal, compared to the life-changing horror the poor Palmeros have been experiencing 24/7, day and night, since the volcano blew on September 19.

I last wrote from La Palma, covering a three-day-old event. Radio reports I did then make me cringe at their breezy tone. That there’d be an eruption was predicted, evacuation and general civil protection protocols had been implemented. The volcano was impressive. There were high anxiety levels, but a feeling of preparedness prevailed.

Homes and farmland had already been lost to two existing lava flows. It was heartbreaking to witness families losing everything, but the forecast of a relatively meagre 11,000 cubic metres of magma waiting to explode over the area, already heading for the sea in two lava flows, offered comforting parameters to the rest of the threatened villages, as did the supposed ‘10 days to a month’ average Canarian volcano lifespan.

The reality is other. 50 hellish days and nights later, it shows no sign of stopping, with 80 million cubic metres of lava spewed out to date.

Several slow-downs in lava emission were the volcano apparently composing itself to emit more sulphur dioxide and lava than ever, often through new vents with faster flowing lava.

How must it feel to live with the stress of probably losing your home, having had 15 minutes to save possessions, then watching as a 15m high lava flow moves towards it, just missing as it veers off to one side or, unaccountably, stops?

Lava covers the village school, streets, houses, the places you played as a child, where your children play. You’ve watched the church tower and everything else in its path crumble like matchwood as it’s buried by lava, but miraculously your house and a few others are saved.

You’re allowed back to save more possessions. To the dreadful noise of the volcano, you stand there pole-axed by the devastation, unable to believe you didn’t lose everything too, helpless with relief.

You go back to where you’re sheltering with family, (only 400 of nearly 7,000 evacuees are in official shelters) stash your posssessions as best you can and perhaps for a week try to come to terms with it all, with your good luck, with your neighbours’ bad luck, with the situation. Or maybe two days, or two weeks.

Then a new mouth blows, or the volcanic cone collapses. Either way, massive quantities of lava spew out and stream down.

At first, new flows tended to follow previous flows, with minimal new destruction, but as new mouths blew lava streamed out in an extended hand shape, fingers fanned. Islanders whose homes escaped suffered the unbearable stress of watching them threatened various times, to be eventually obliterated by lava. Or not.

This nightmare’s been suffered by thousands. Most say it’s almost a relief when it finally happens, when you know you’ve lost everything, that it would have been less stressful had it happened sooner.

The stress of losing everything, at the beginning or later, or still having a home and hope, is exacerbated by the dreadful, ever present roaring of the volcano, poor air quality, high volcanic ash fallout which kills gardens and crops and requires daily removal to avoid roof collapse, and total uncertainty about the future.

These are strong people, accustomed to their volcanic environment, but so many days of high-level stress and danger are unbearable, especially given the uncomfortable evidence that seismic movements are far from decreasing.

I’m no believer, but please pray for them.