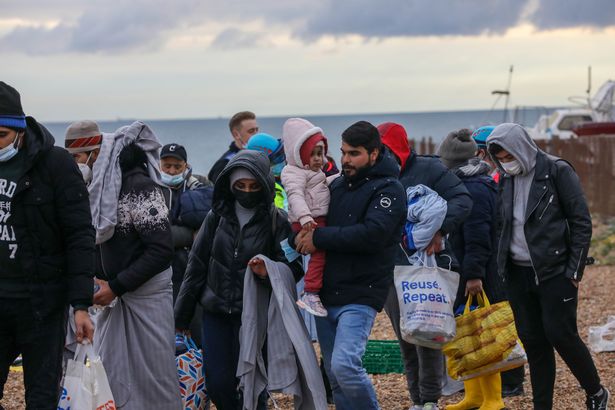 A group of volunteers give English Channel migrants clothes and fish and chips This charitable offering was founded by Rachel Lowden, 46, after she and her daughter Ella, 19, witnessed a group of migrants land in Hastings with around 60 people on board this summer.

Once Rachel realised that the people on the dinghy were Channel migrants, she went straight home and grabbed emergency supplies. Including blankets, warm clothes and a quick stop off at the local chippy for food. Then, she rallied her friends to help in her mission of aid. On the dinghy, there were people from Syria, Iran and Eritrea, including eight children under the age of 10”, she said.

Ms Lowden told The Times “I was told by the police that Border Force had said, ‘Leave them to drift; there are a thousand people travelling across today and we can’t deal with it.”

“The police decided to bring the boat ashore because of the volume of children on it and the lifeboat reporting they had been at sea for 18 hours.”

After witnessing the mass arrival of Channel migrants, Ms Lowden set up Hastings Supports Refugees with her friend Jane Grimshaw, 52.

The volunteer group is made up of locals who take dry clothes, blankets and hot food and beverages to give to the Channel migrants when they arrive in the UK. The migrants receive these before they are taken to Dover to be processed by Border Force Officials.

Rachel explained “We didn’t anticipate so many boats would be coming in, so we’re working hard to form good relationships with the police and coastguard so they know we’re not there to interrupt them. It’s just literally about giving them immediate aid.”

Her friend Ms Grimshaw said, “volunteers were also able to put a teenager who had travelled from Syria on his own in touch with his parents.”

Hastings Supports Refugees has now launched a crowdfunding page to help support refugees and asylum seekers in Hastings and abroad.

On November 21, French authorities said a total of 243 migrants were rescued in the English Channel on Friday, November 19, and Saturday, November 20, while trying to cross to Britain from France in makeshift boats.

“After many boats were reported in distress on Friday night, rescue operations continued into Saturday evening,” the prefecture for the Channel and North Sea said in a statement.

The Channel migrants were brought back to the French ports of Boulogne, Dunkirk, Calais and handed over to French border police and rescue crews, it said.