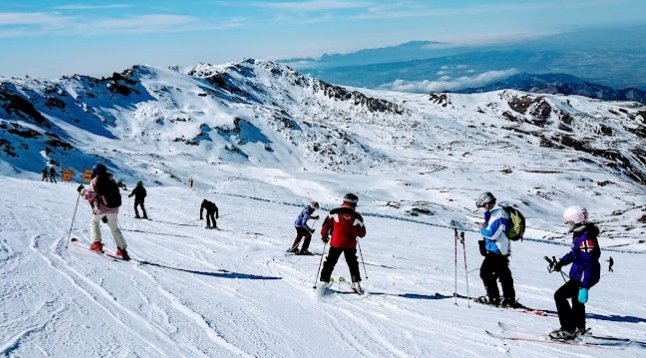 Sierra Nevada’s winter season is underway and prospects are good

The Sierra Nevada is Europe’s southernmost ski resort, and this Saturday, November 27, its ski-lifts were activated once more, as this year’s winter season got underway. It is reported that there is already 20cm of fresh snow on the ground, and nine kilometres of slopes are skiable.

In the hope of a more stable season this year, after last year’s on-and-off restrictions, the Sierra Nevada’s hoteliers and merchants in Pradollano and Borreguiles are optimistic about a successful season. Now they just need to return to the numbers generated in 2019.

The drop in temperatures, combined with the rainfall in recent weeks has been a great help to getting the doors open this weekend. While the capital of the province, and other parts of the region, received rain, near the mountain peaks, it fell in the form of snow. This has greatly alleviated the preparation work during these last few days.

A real bonus for the Sierra Nevada is the fact that data shows Granada province to have the lowest virus infection rates in Andalucia. It is more than 30 points below the second-lowest, Jaen.

As explained by Jesus Ibañez, CEO of Cetursa, during a live interview with GranadaDigital, during this first weekend, the areas that will be open will be the beginner’s area of ​​Borreguiles. For advanced skiers, areas such as the River, and the Stadium, will also be open.

“A mask must be worn on the ski lifts and on the chairs, but at the moment there is no capacity restriction. If we see that there is too much crowding, we will limit the capacity, we hope that people understand it”, said Ibañez.

According to data from Enrique de la Higuera, spokesman for the Sierra Nevada businessmen, a hotel occupancy of 50 per cent is expected for this first week of the season. Compared to last season, when a 30 per cent occupancy was recorded, things are already looking good, as reported by granadadigital.es.