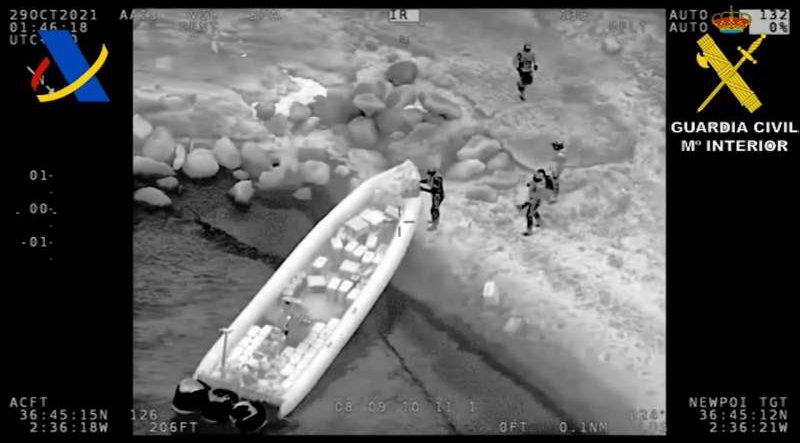 Almeria drug smugglers thwarted by joint operation. On December 23, the Guardia Civil and the Tax Agency arrested four members of a criminal organisation that smuggled large quantities of hashish along the coast of Almeria.

Operation Dauphin began when it was discovered a possible haul was being smuggled along the coast of Almeria, so a joint operation was set up involving the Guardia Civil by land and the Tax Agency’s Customs Surveillance by sea and air.

In the early hours of the morning, a boat was detected by air off the coast of Roquetas de Mar, so the operation focused on that area. In addition, a group of people and two vehicles had been spotted in Castillo de Santa Ana in the same municipality.

The teams were coordinated, carrying out an encirclement on land, while the air and maritime resources supported the operation so that the crew members of the suspicious vessel could not evade police action.

The Customs Surveillance officers managed to arrest the pilot and seize the speedboat, as well as 53 bales containing some 30 kilograms of hashish in each. Other members of the tried to evade the police encirclement by ramming a camouflaged Guardia Civil vehicle, resulting in two minor injuries. Despite this, the agents managed to arrest a member of the organisation. Thanks to the encirclement, two more people were arrested on the ground and another bundle was found in a vehicle in the vicinity.

As a result of the operation, a total of four Almeria drug smugglers were arrested and 54 bales of hashish, weighing approximately 1,624 kilograms, were seized. In addition, a cargo vehicle, and a 12-metre semi-rigid boat with three powerful 300 hp engines were seized.

Thank you for taking the time to read this article, Almeria drug smugglers arrested with 1,600 kilograms of hashish. Do remember to come back and check The Euro Weekly News website for all your up-to-date local and international news stories and remember, you can also follow us on Facebook and Instagram.