Film Review: Don’t Look Up – Not your average end of the world movie 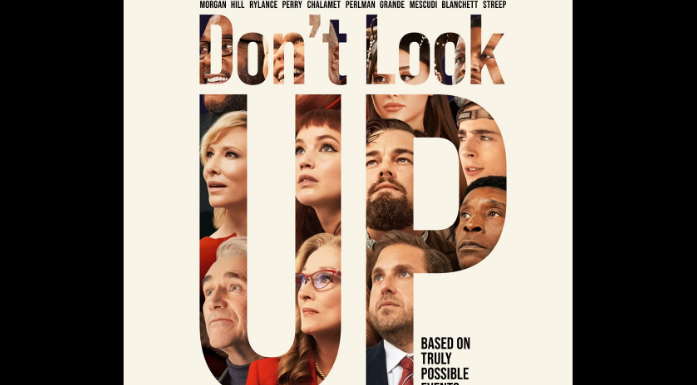 Don't Look Up - not you're average end of the world movie. Image - IMDB

A huge comet is hurtling towards earth and two scientists are the only people who can sound the alarm, but this isn’t your average end of the world movie.

Adam McKay’s Don’t Look Up, which was released on Netflix on December 24, is a science fiction film that uses the disaster framework as a metaphor for climate change, but this isn’t your average disaster movie. It’s a satire that points fun at and draws attention to the media, social networks and pop culture, testing whether audiences are prepared to laugh at the threat of mass extinction.

With a 56 per cent critic rating and 77 per cent audience rating on Rotten Tomatoes, I think you will either love this movie or hate it, I personally loved it.

There’s a lot of layers to this film, all centred around a comet that is in direct collision with earth and Dr Mindy, played by Leonardo DiCaprio, grad student Kate Dibiasky, played by Jennifer Lawrence (Silver Linings Playbook) go on a media quest to warn the world. However, the White House, the media and the public are completely unconcerned about their impending doom – drawing attention to how climate change has been ignored for so long.

Meryl Streep plays an indifferent President Orlea and Jonah Hill (Pineapple Express) plays her son and Chief of Staff, who are more concerned that news of an apocalypse won’t reflect well in her voting numbers. While Cate Blanchett plays daytime talk-show host Brie Evantee who pokes fun at the scientists on live television, encouraging the public to call them “crazy.”

It’s no coincidence that DiCaprio is a part of this movie, being such a huge campaigner and activist raising awareness about global warming. There are also a few other well-known actors that add to this all-star cast.

This satirical movie is a humorous take on a serious global issue that is “based on truly possible events” and looks at what it will take the world and the media to “just look up” and face the inevitable climate crisis that so many are ignorant about.