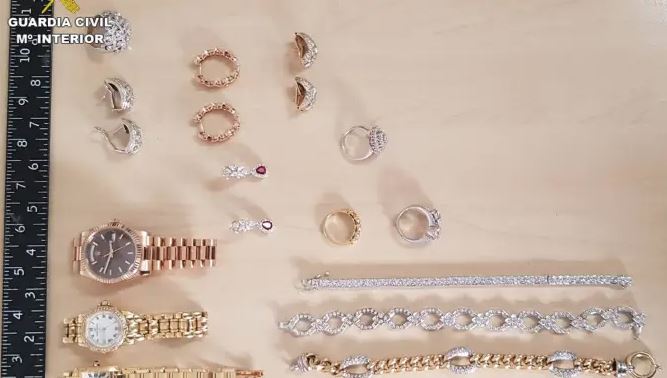 Jewel thieves caught on Spain’s Costa Blanca. The young thieves had managed to steal more than a hundred thousand euros worth of jewellery.
Officers from the Guardia Civil arrested two Albanian nationals aged 20 and 22 years old. The suspects had allegedly committed four robberies using force in Valencia and Murcia. The suspects had also attempted to flee from the officers.
The alleged perpetrators of these crimes have now been remanded in prison by the Torrevieja Magistrate’s Court which is hearing the case.
On December 8, Guardia Civil officers from Torrevieja were carrying out an operation in a residential area to prevent crime. They spotted a car approaching them but when the driver noticed the officers the car sped off. A chase ensued and the car was followed by several patrol vehicles. The officers managed to catch up to the suspects but the two men left the car and tried to escape on foot before being caught.
The men were soon caught and the car was searched. The men were discovered to be carrying 500 euros in cash and items of jewellery were also recovered.
An investigation began and the officers discovered that the suspects had stolen jewellery from a home in Caravaca de la Cruz, in the Region of Murcia. They had also carried out multiple robberies in Valencia.
The robbers had staked out the houses that they intended to rob and waited for the owners to leave. The men then forced entry into the houses and stole jewellery and cash.
Officers from the Guardia Civil in Torrevieja were able to recover jewellery worth more than 116,000 euros. The alleged perpetrators of the robberies have been charged with four offences of robbery with force and one offence of serious disobedience and resistance. They have also been charged with one offence of having false documentation.