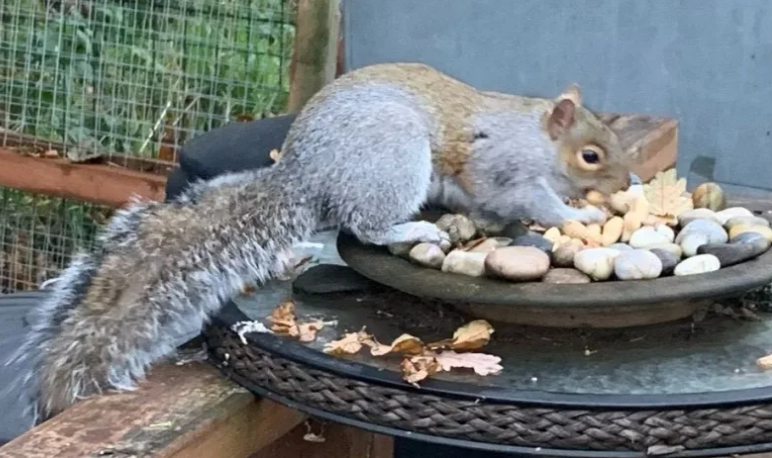 A vicious squirrel has bitten 22 people and has terrorised a Welsh town in Flintshire, according to locals.

Several locals in the Welsh town of Buckley, Flintshire, have posted on a residents’ Facebook page to warn others about the squirrel’s Christmas rampage.

One local described the animal as “vicious,” saying that they had been bitten by the squirrel, with another friend and another person living nearby had been attacked too.

Someone else posted an image of their finger bleeding, saying that the rodent had bitten it as they put their recycling out for collection.

Corinne Reynolds, 65, who lives in the area and was bitten by the woodland creature, managed to humanely trap the squirrel after seeing the claims about people being bitten.

She said some people were “scared to go out” after hearing about the string of attacks.

She said: “I’ve fed him since March in my garden. He’s been fine with me, just watched me in the garden and came close enough to take a peanut out of my hand.”

“It was always friendly to me apart from the last three days when suddenly its behaviour changed and as soon as he saw me he bounded across the garden or jumped off the shed roof onto my head and wriggled round my neck and body.”

She said of her surprise that so many people had been bitten by the animal, some “quite severely.” However, when she was bitten herself, she realised the animal’s behaviour had changed and something needed to be done.

She said: “His behaviour had altered and he was erratic, so I got a humane trap and caught him for peoples’ safety.”

Ms Reynolds 65-year-old has since taken the animal to be put down at a veterinary clinic.

In the UK, it is against the law to release a grey squirrel back into the wild and any trapped ones have to be destroyed humanely.

“I feel incredibly sad it’s been put to sleep, but I had no option” she explained.

“The amount of people bitten by it…the bad wounds on some meant something had to be done.”

“Twenty-two people altogether have been bitten by it, all in this local area. Some of the stories are awful, people are really scared to go out.”

“And while I’m not proud of doing what I did, I know I have the support from many for doing it, not just my friends but total strangers.”