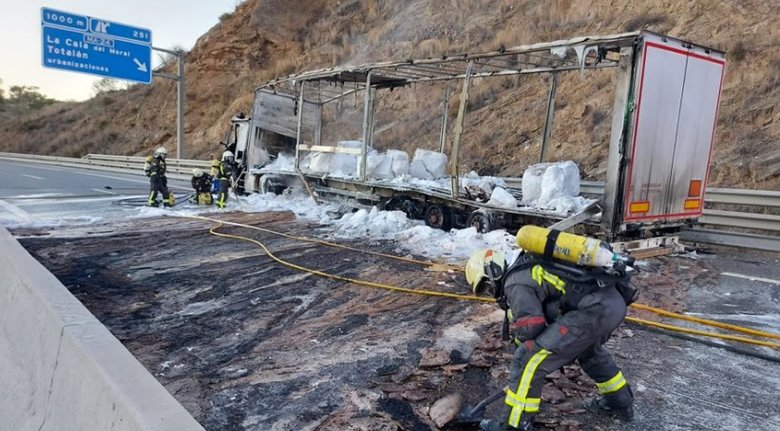 A lorry traveling on the A-7 motorway near the Malaga municipality of Rincon de la Victoria caught fire on Thursday, January 20, causing huge tailbacks for several hours, as emergency services tackled the incident. The incident occurred about 1km from the exit of La Cala del Moral in the direction of Malaga.

The lorry was transporting 24 tons of potassium nitrate , and its spillage onto the road surface caused substantial damage to the tarmac. One lane between Km 254 and 259 was closed for most of the day while Guardia Civil patrols and firefighters from the Provincial Fire Brigade Consortium worked to clear the damage.
Potassium nitrate is used in the pyrotechnic industry, in the manufacture of glass, matches, as a fertilizer, and as a medicine.
112 emergency services received a call at around 3.45am, and immediately deployed the emergency services to the scene. The worst of the traffic delays were seen in the early morning, and midday, with tailbacks of up to 5km at one point for drivers traveling from the Axarquia towards Malaga.

No injuries were reported, but the lorry was completely burned out. Given the dangerous nature of the lorry’s load, Patricia Navarro, the Andalucian Government delegate in Malaga, activated situation 1 of the Emergency Plan. This is the protocol due to any risk of accidents in the transport of dangerous goods by road and rail on the A-7, and it was kept in place for two hours.

As reported by the Provincial Firefighters Consortium, the preventive confinement of the nearest homes was recommended by the emergency teams, and two homes in the immediate vicinity were evacuated as a precaution, as reported by malaghoy.es .