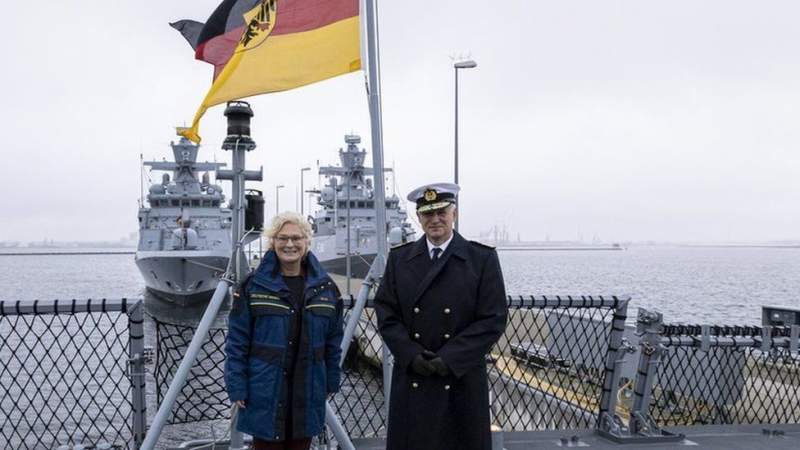 The Chief of the German navy resigns over controversial comments he made over Ukraine, suggesting the idea that Russia wanted to invade Ukraine was nonsense. Kay-Achim Schönbach added that all President Putin wanted was respect.
Russia has denied that it intends to invade Ukraine but rather that it wants the West to back down from its expansion of NATO eastwards. The west has said in response that it had no intentions of backing down with many countries supplying weapons and other support to the Ukraine. Germany however has refused Ukraine’s request for ammunition.
Mr Schönbach, who made the comments while speaking at a think-tank discussion on India, said on Saturday that he had resigned from his role “with immediate effect” in order to “avert further damage”.
A video of the comments was later published to social media.
In the video, Mr Schönbach said Putin needed to be treated as an equal by the west. He said: “It is easy to give him the respect he really demands, and also probably deserves.”
He added that the Crimean peninsula, which Russia annexed in 2014, “is gone and will never come back”.
Ukraine’s foreign ministry had described Mr Schönbach’s comments as “categorically unacceptable.
The head of NATO has warned there is a real risk of a fresh conflict in Europe after an estimated 100,000 Russian troops amassed on the border.
Germany has refused to send weapons instead had already delivered respirators to Ukraine and severely injured Ukrainian soldiers are being treated in German military hospitals.
Ukraine has denounced Germany’s response, accusing Berlin of undermining Western unity by refusing to transfer weapons to Ukraine or allowing some of its allies to do so.
Ukrainian Foreign Minister Dmytro Kuleba said in a series of posts on Twitter that Germany’s stance encouraged Mr Putin to launch an attack. Such comments will clearly have led the German navy chief to resign.