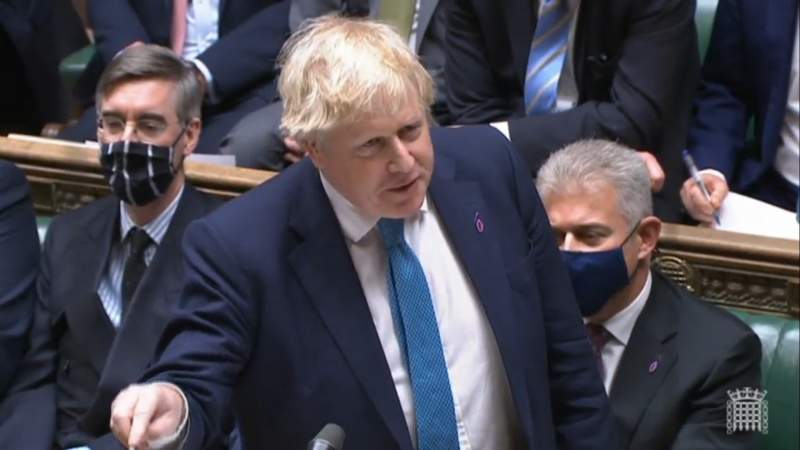 AS UK Prime Minister Boris Johnson continues to face the music from the Partygate fall-out, he was in a fighting mood at the PMQs on Wednesday, January 26 as he answered questions about his future amid pressure from Labour’s Sir Kier Starmer.
Answering questions in parliament, Johnson was accused by the opposition Labour leader of changing his story over the gatherings and was asked whether he would now step down.
To which Boris simply replied: “No”.
Sir Keir Starmer started the Prime Minister Questions by asking the PM whether he believes the ministerial code – that says ministers who knowingly mislead parliament must resign – applies to him.
Boris Johnson replies “of course”, before adding he cannot comment on an ongoing investigation. Mr Johnson is set to hear the finding of the Sue Gray inquiry, the civil servant investigating the ‘Partygate’ scandal at 10 Downing Street as early as January 26.
Sir Keir Starmer, who accused the PM of going into hiding after last weeks PMQs, told the PM: “If you do not understand the significance of what happened yesterday then I really do despair.”
He then asked: “Having got the material from Sue Gray, the police had to make a decision on whether the material before them was the most serious… breach of the rules.”
Boris reiterated that he cannot answer questions about an ongoing investigation and shifted the conversation to the ongoing threat of potential war between Russia and Ukraine, stating that “there are more important issues going on in the world”.
However, Sir Starmer, rallying the troops in parliament continued to press the PM on the Sue Gray report saying that the public have clearly “made up their minds” that Mr Johnson is not “up for the job”.
“How much damage are the PM and his cabinet prepared to do to save his skin,” he asked.
A defiant PM hit back at Starmer stating: “The problem with the Labour Party today is he’s a lawyer, not a leader,” to which Labour’s Jess Phillips responded: “Problem with Boris Johnson is he’s a liar, not a leader.”
Ian Blackford, Westminster leader of the SNP, again insisted Boris Johnson resign.
“At the heart of this matter we have a Prime Minister who is being investigated by the police for breaking his own laws. Absolutely unprecedented. A man who demeans the office of prime minister. This is the latest in a rap sheet that is already a mile long,” he said, listing allegations against the PM and Downing Street staff.
“Every moment that he stays he is dragging out the agony of families who are reminded of the sacrifices they made and dragging his party further through the mud.”
Mr Johnsons responded that Mr Blackford made the same point last week. “He was wrong then, he’s wrong now.”
Adding: “I have absolutely no intention of doing what he suggests.”
On closing the PMQs, Sir Keir asked if Mr Johnson would publish the Sue Gray report in full, but the PM just answered: “Of course, I’ll do what I said.” Boris earlier commented that it will be published but did not confirm if the entire report will be.