Trawler sheds 100,000 dead fish off the coast of France 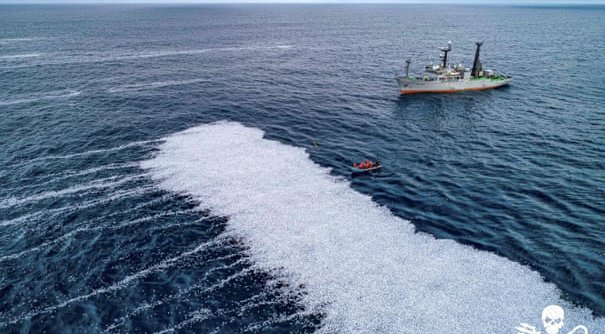 There has been shock and outrage in France as pictures have been revealed that show a carpet of more than 100,000 dead fish floating off the country’s coast. The fish have been shed in the Atlantic by the world’s second-biggest shipping trawler, the Dutch-owned FV Margiris.
France’s maritime minister, Annick Girardin, called the images of the dead fish – which formed a floating carpet of carcasses spotted by environmental campaigners – “shocking” and has asked the national fishing surveillance authority to launch an investigation.
Virginijus Sinkevicius, the European commissioner for environment, oceans and fisheries, also said he was seeking “exhaustive information and evidence about the case”.
The dead fish spillage happened early on Thursday 3 February and was said to have been caused by a rupture in the trawler’s net, said the fishing industry group the Pelagic Freezer-Trawler Association (PFA), which represents the vessel’s owner. In a statement, the group called the spill a “very rare occurrence”.
“In line with EU law, this has been recorded in the vessel’s logbook and reported to the authorities of the vessel’s flag state, Lithuania,” it said. It added that the dead fish would be subtracted from the vessel’s quota.
The French arm of campaign group Sea Shepherd first published images of the spill, showing the ocean’s surface covered by a dense layer of blue whiting, a sub-species of cod, used to mass-produce fish fingers, fish oil and meal. It said the spill involved more than 100,000 fish and covered an area of about 3,000 sq m (32,300 sq ft).
Trawlers like the Margiris use drag nets more than a kilometre long and process the fish in onboard factories, a practice heavily criticised by environmentalists.
After protests by activists, the Margiris was forced to leave Australian waters in 2012. The vessel had a quota to haul 18,000 tonnes of fish from the sea but was banned by the then Labor environment minister Tony Burke following a public outcry.
Traffic data by marinetraffic.com on Friday showed the vessel, which is owned by the Dutch company Parleviliet & Van der Plas and sails under the flag of Lithuania, was still engaged in fishing activities off the French coast, as reported by The Guardian.