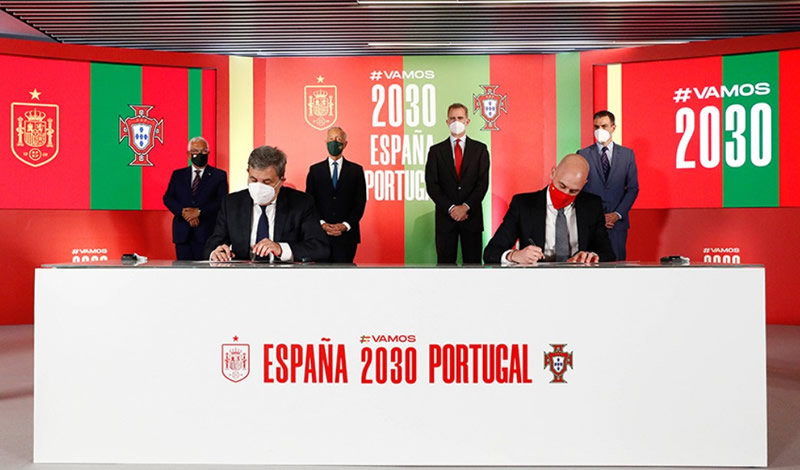 After Great Britain and Ireland withdraw, Spain and Portugal’s ‘Iberian bid’ is the only European candidacy for the 2030 World Cup

The Iberian candidacy by Spain and Portugal remains as the only European candidate to host the 2030 World Cup today, Monday, February 7. This comes after the withdrawal of the bid from Great Britain and Ireland, who will now concentrate on Euro 2028. An Iberian bid has the full support of UEFA, and the governments of both countries.

Competition to stage the prestigious sporting event will come from South America, led by Argentina, Paraguay, Uruguay, Chile, and Bolivia. The 2026 tournament will take place on North American soil, with Canada, the United States, and Mexico, sharing the hosting.

Morocco has come into the frame as well. Its federation could choose two ways of being involved. One would be to join with Algeria and Tunisia, to form a North African bid, or it could possibly apply to join the Iberian candidacy.

Officials from the Royal Spanish Football Federation are believed to consider that a joint bid with Morocco and Portugal, would receive more support to achieve the ultimate goal of hosting the World Cup.

Spain is spoiled for choice when it comes to great venues for playing the group matches of any tournament. UEFA has placed a cap of 40,000 on the capacity of any stadium hosting matches.

Madrid has the new Santiago Bernabeu, and the Wanda Metropolitano, while Barcelona has the Camp Nou, and the Montjuic Olympic Stadium. Valencia has the Nou Mestalla when work is completed, and further north, the Nuevo San Mames, and the Reale Arena.

Andalucia also has its share of suitable stadiums. Sevilla has three: Benito Villamarin, the Sanchez-Pizjuan, and La Cartuja, while in Malaga there is the La Rosaleda.