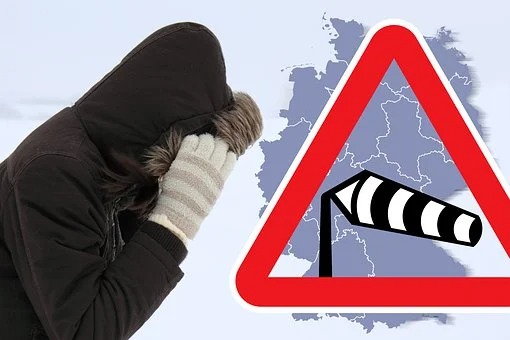 Double Trouble: Met Office names storms bringing hurricane winds and snow to the UK.
The Met Office has named the impending storms, Storm Dudley and Storm Eunice. The two storms have been predicted to strike within hours of each other. The Met Office has issued a danger to life warning. Hurricane-like winds of 90 mph have been predicted along with snow.
The Met Office has issued an amber danger to life warning. The warning covers parts of Scotland, Northern Ireland and northern England. The warning has been put in place from 6pm on Wednesday and it will run until Thursday a 9am.
According to the national weather agency along the coast “injuries and danger to life is likely.” The agency has predicted that properties on the seafront could be hit with “beach materials.” It has also warned of the possibility of power cuts.
Storm Eunice is expected to hit all of England, Wales and Northern Ireland.
The Met office commented that there is a: “small chance that flying debris will result in a danger to life, with fallen trees, damage to buildings and homes, roofs blown off and power lines brought down”.
Paul Gundersen the Met Office’s chief meteorologist explained: “An active jet stream is driving low-pressure systems across the country, both of which are likely to cause some disruption and National Severe Weather Warnings have been issued.”
Fellow Met Office meteorologist Tom Morgan has warned that the main cause of concern will be the wind. He stated: “This whole week is going to see quite a disturbed weather pattern developing across the UK.
“Wind will be the primary cause for concern next week.”
Speaking to the Mirror he revealed: “Through this week northern parts of the UK will see snow.
“We will see snow in the higher parts of Scotland tomorrow, in places such as the Grampians and the Highlands.
“On Tuesday morning there will be more substantial snow in the high ground of Scotland and in the Pennines in England.
“It’s possible that we could see 10cm of snow above 400 metres.”
He went on to add: “There could be disruption to rush hour traffic on Tuesday morning along the high routes in central and northern Scotland.”