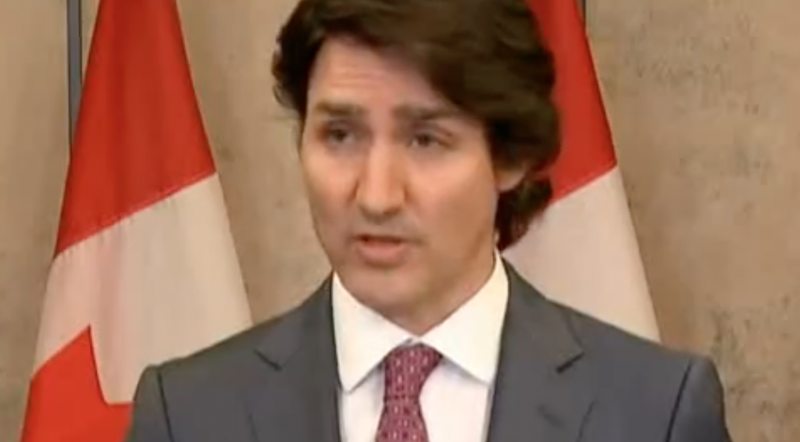 CANADA – PM Justin Trudeau invokes the Emergencies Act to deal with the “Freedom Convoy” protesting against vaccine mandate laws in the country.
The Freedom Convoy protests, which was started by Canadian truckers opposing a COVID-19 vaccinate-or-quarantine mandate for cross-border drivers, have drawn thousands of people opposed to Trudeau’s policies.
However, Prime Minister Trudeau is hoping that the Emergencies Act, the successor to the War Measures Act, will help quell protests in Canada. Mr Trudeau said the scope of the measures would be “time-limited”, “reasonable and proportionate” and would not see the military deployed.
Speaking on Monday, February 14, Trudeau said: “With each illegal blockade, local law enforcement agencies have been acting to keep the peace within their jurisdiction. Despite their best efforts, it is now clear that there are serious challenges to law enforcements ability to effectively enforce the law.
“On Friday, Ontario invoked a state of emergency to respond to the blockades. This was the responsible and necessary thing to do. Today, to continue building on these efforts, the federal government is ready to use more tools at its disposal to get the situation fully under control.
“After discussing with cabinet and caucus, after consultation with premiers from all provinces and territories.. the federal government has involved the Emergencies Act to supplement provincial and territorial capacity to address the blockades and occupations.
“The scope of these measures will be time-limited, geographically targeted, as well as reasonable and proportionate to the threats they are meant to address,” he said.

What is the Emergencies Act?

The Emergencies Act “is an act of the Parliament of Canada to authorise the taking of special temporary measures to ensure safety and security during national emergencies. It is considered to provide “the stiffest government emergency powers of any emergency law in Canada.”
The Emergencies Act had never been used since its creation, having replaced the War Measures Act in the 1980s.
Trudeau said: “The Emergencies Act will be used to strengthen and support law enforcement agencies at all levels across the country.
“This is about keeping Canadians safe, protecting people’s jobs, and restoring confidence in our institutions,” the PM said.

“The Emergencies Act will also allow the government to ensure essential services are rendered, for example in order to tow vehicles blocking roads.
“Financial institutions will also be authorised or directed to render essential services to help address the situation, including by regulating and prohibiting the use or property to fund or support illegal blockades.
“And finally, it will enable the RCMP to enforce municipal bylaws, and provincial offences, where required,” said Trudeau.

However, the announcement did not go down well with many, who have accused the 50-year-old of bringing ‘martial law’ to Canada.

“Canada became a dictatorship today. It actually did,”  Carlson said on his show Monday following the announcement, before pointing out that the PM avoided a meeting with the truckers in Ottawa and “fled the city and then from his bunker, he called the truckers Nazis.”

“When they still didn’t leave the city, Justin Trudeau suspended democracy and declared Canada a dictatorship,” the 52-year-old said.

He explained that under martial law, “Trudeau has the power to force banks to seize their bank accounts, and insurance companies to cancel their insurance.”

“That means they can’t actually live in Canada,” he said. “They are nonperson. They are enemies of the state — and they will be crushed.”