Busted for string of forced robberies in Almeria 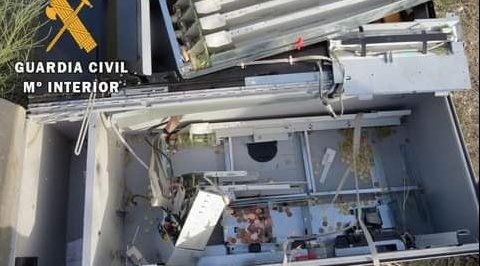 Busted for a string of forced robberies in Macael, Olula del Rio, Purchena and Tijola.
Officers from the Guardia Civil in Almeria have arrested four people. The people are believed to be the perpetrators of 10 robberies that were carried out using force in the Almeria towns of Macael, Olula del Rio, Purchena and Tijola. Two of the people that were arrested are said to be minors.
The value of the stolen goods and the damage caused during the robberies amounted to a staggering 18,000 euros.
During the investigation officers from the Guardia Civil recreated some of the crimes that had been committed. The investigation was launched after the Guardia Civil were made aware of two robberies that had been committed with force. The robberies had been perpetrated in the town of Macael. During the robberies, cash, carburettors, three bottles of petrol and three mobile phones were stolen.
The officers were able to track down the mobile phones and even used voice recognition to help identify the culprits. One of the alleged perpetrators was caught in Huercal Overa at a police control point. There were caught with three bottles of petrol in the boot that were later recognised by the victim of the robbery.
During the investigation, the officers became aware that multiple crimes had been committed with the same MO in the areas of Tijola, Olula del Rio, Purchena and Macael. One of the establishments had even been robbed on three separate occasions.
CCTV footage helped identify one of the perpetrators. One individual was also linked to a crime in Puerto Lumbreras where almonds had been stolen. They were also linked to crimes where damage had been caused and forged cheques had been cashed.
The alleged perpetrators have been handed over to the courts. One of the people has already been sent to prison.