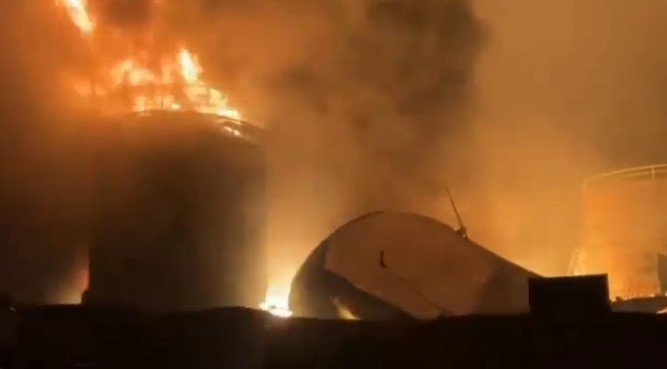 According to local Ukrainian news website BNO, in the early hours of this Sunday, February 27, Russian missiles made a direct hit just outside the capital Kyiv, on a nuclear waste disposal site.

A report on their website said, ‘As a result of the mass bombing of Kyiv with all types of anti-aircraft and missile weapons available to the Russian Federation, their missiles hit the radioactive waste disposal site of the Kyiv Branch of the State Specialized enterprise ‘Radon”.

Initial reports from BNO said there was no evidence of any radioactive leak, but pointed out that during the strike, ‘the automated radiation monitoring system failed’. The worst-case scenario would be that dangerous nuclear material could have been spilled.

They elaborated more by saying that once it is safe to enter the area without being under attack, then an examination would take place to check for any radioactive material, but that a ‘preliminary assessment’ showed no active threat.

Vladimir Putin is allegedly furious at his military’s slow progress, with Ukrainian forces putting up a far greater resistance than the Kremlin is said to have expected. At least 240 civilians have been killed so far according to the latest official figures from the UN.

The Kyiv Independent reported that near the eastern city of Kharkiv, not far from the border with Russia, a gas pipeline has been blown up. An oil depot at the Vasylkiv Air Base was also targeted and blown up, about 40 miles south of Kyiv.

It is unclear if anybody was injured in the gas pipeline explosion, but footage posted on social media showed a huge mushroom cloud filling the sky, with balls of flame shooting up.

Footage of the Vasylkiv attack, uploaded by Nexta, the Ukrainian TV station, showed clouds of black smoke, along with a clip of the moment the depot was hit, as the night sky lit up with a bright white glow.

Fumes released by the fire following the explosion can be harmful, and residents as distant as Kyiv have been instructed to keep all windows closed as a precaution, as reported by dailymail.co.uk.

The footage shows a gas pipeline on fire in Kharkiv after a Russian attack.