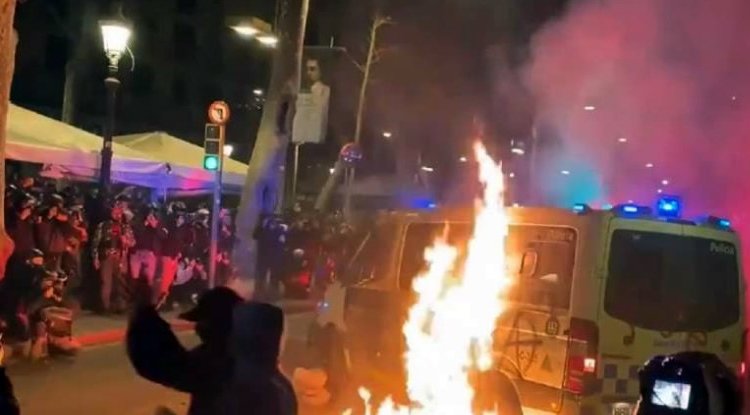 A 42-year-old Italian man has been arrested this morning, Thursday, March 10, for his alleged involvement in setting fire to a Barcelona Urban Guard van with its officers still inside, during the Pablo Hasel riots.

A search, arrest and appearance order had been issued by the Mossos d’Esquadra for Giuseppe Sciacca after the incident in February 2021. As confirmed to larazon.es by police sources, a joint operation between French and Spanish police saw him detained as he attempted to cross the border into Spain earlier today.

His arrest occurred in the Gerona municipality of La Junquera, at the access to the old customs post, when he entered Spain on board a Mercedes A170.

The incident that Sciacca is wanted for questioning over, occurred on February 27. A demonstration had taken place one hour after the jailing of rapper Pablo Hasel, which turned into rioting. During this action, several people destroyed banks and moved containers to prevent the police from advancing.

In the heart of the Ramblas district of Barcelona, ​​they began to throw objects and use fireworks against the police officers who were attempting to calm the situation. It was at this point that several demonstrators set fire to a police van of the Guardia Urbana. The officers were still inside the vehicle at this moment of maximum tension.

There were looting incidents in different establishments as the rioters passed through the city of Barcelona. In the streets parallel to Las Ramblas, barricades were erected using burning containers. Mossos reported at the time that a hotel and various establishments had burned down.