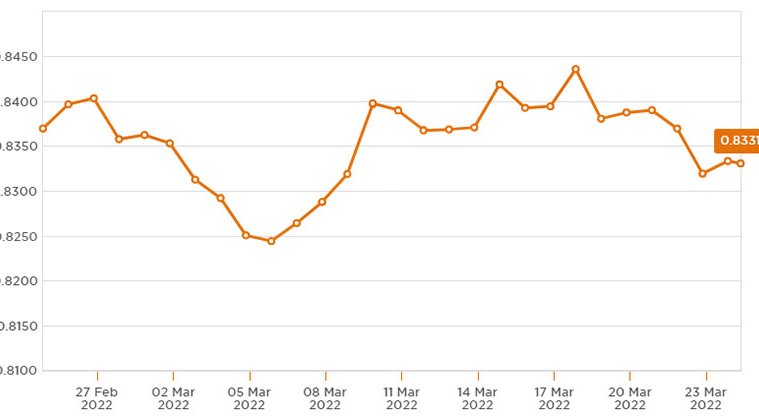 STERLING: Took a hit in the wake of the Bank of England’s interest rate decision.

The euro was infused with significant volatility through the past four weeks as the war between Ukraine and Russia rocked currency markets.

EUR exchange rates are highly sensitive to the crisis in Ukraine amidst fears the Eurozone is particularly vulnerable to any economic fallout which could arise as a result of the war and sanctions imposed on Russia.

This lead to the single currency fluctuating through March. Stumbling amidst reports the Russian offensive may be intensify, and rallying on any reports of positive progress being made in peace talks.

Elsewhere the European Central Bank’s (ECB) announcement it would wind down its asset purchasing programme by Q3 2022 helped to buoy EUR exchange rates, before ECB President Christine Lagarde quashed hopes the bank could raise interest rates before the end of the year.

Looking ahead, it seems safe to assume the situation in Ukraine will continue to act as a major source of volatility for the euro. The longer the conflict drags on the more pain it is likely to cause the single currency.

The increasingly risk-sensitive pound also traded in a wide range over the past month as a result of uncertainty over the war in Ukraine.

GBP investors are particularly concerned about the potential for the conflict to fan inflationary pressures in the UK, exacerbating the current cost-of-living crisis.

Sterling took a notable hit in the wake of the Bank of England’s (BoE) March interest rate decision. While the BoE hiked rates to their pre-pandemic levels as forecast, the bank’s forward guidance proved more dovish than hoped, prompting a sharp slump in GBP exchange rates.

This left the pound exposed to losses in the wake of the UK’s latest consumer price index. As a sharp rise in inflation was seen as piling more pressure on UK consumers.

Going forward, the pound could struggle to hold its ground as the reduced odds for more BoE rate hikes leaves the currency vulnerable to additional selling pressure.

The US dollar has trended broadly higher through March, with the safe-haven currency attracting considerable risk-off flows as the Ukraine crisis rattled markets.

The start of the war saw the US dollar strike multi-month highs against both the euro and pound amidst concerns over how the sanctions placed on Russia could impact the global economy.

While peace talk optimism has tempered some of the ‘greenback’s gains in recent weeks, the currency still remains well above the levels it was trading at prior to the war.

The upside in USD exchange rates has been aided by the Federal Reserve, which delivered its first rate hike since 2018, whilst also signalling plans for up to six additional hikes through 2022.

Looking ahead, the Fed’s aggressive monetary tightening plans and the ongoing war in Ukraine are likely to underpin demand for the US dollar in the weeks to come.