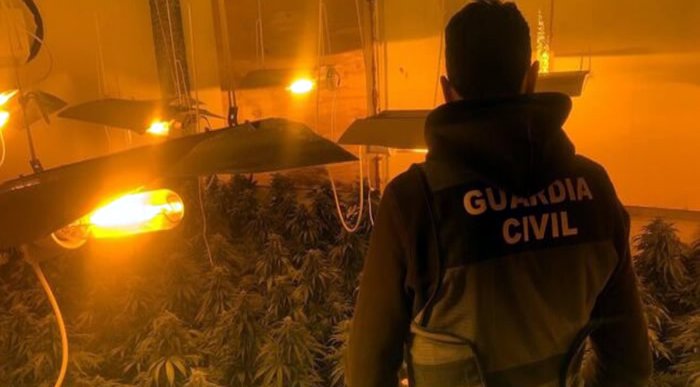 1,460 marijuana plants seized during Guardia Civil raids on three homes in the province of Granada

Guardia Civil officers in Granada province have this Friday, April 15, seized 1,460 marijuana plants in different stages of growth. They were discovered in three large-scale production centres in the municipality of Moraleda de Zafayona.

Five individuals were arrested as a result of ‘Operation Ayosa’, accused of suspected crimes against public health, drug cultivation, and the minor crime of electricity fraud.

Officers from the Huetor Tajar post, in the Poniente region of Granada, found out that cannabis sativa was being cultivated and that marijuana was being produced in three homes on an urbanisation in Moraleda de Zafayona.

To corroborate this information, the Guardia Civil requested the collaboration of Endesa to carry out a measurement and detect possible illegal connections to the electricity grid. During the inspection, three fraudulent double single-phase connections were found in as many homes.

With the evidence collected, authorisation was requested from the Court of First Instance and Instruction No1 of Loja, to search the three suspicious addresses.

During these searches, the officers found the equipment necessary for the intensive cultivation of cannabis. Along with the 601 cannabis sativa plants in different stages of flowering, they uncovered a rifle and a compressed air pistol in the first home; 200 plants and another compressed air gun in the second, and 659 cannabis sativa plants, and 55 grams of marijuana already produced in the third, as reported by granadahoy.com.