WATCH: CCTV footage shows shocking attack by a monkey on a toddler 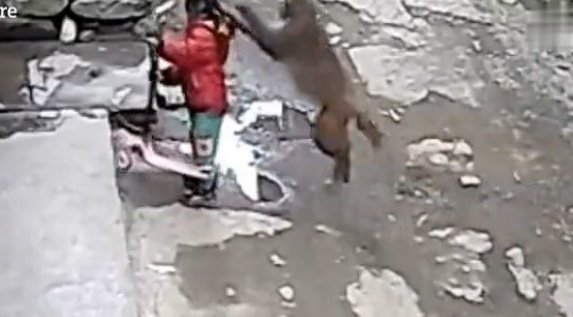 The moment a monkey attacks a toddler. Image: [email protected]

Shocking CCTV footage released last Tuesday, April 19, shows a wild monkey grabbing a toddler off her scooter as she plays out in the street. It subsequently starts to drag her across the road while holding her hair.

The incident occurred in the Chongqing municipality of China, but thankfully the unsuspecting child was rescued from the marauding animal. Thankfully, she was reportedly not seriously hurt in the attack, suffering minor scratches to her face.

In the footage – shown below – the monkey can be seen evaluating the situation, before sneaking up behind the child and throwing her to the ground. Luckily for the little girl, a vigilant bystander saw what was going on and raced to rescue her before the monkey could take her too far.

The toddler’s mother, Liu, only found out what had happened when one of the neighbours informed her. She had been busy indoors cooking when the attack took place, and immediately went to check the CCTV, which revealed the footage.

Liu headed straight to the authorities to report the attack. They confirmed that her daughter would receive medical attention, including a vaccination.

This monkey is apparently famed for its activities in the neighbourhood. According to locals, it arrived in their village last May, and has already carried out several attacks on pensioners. Despite attempts by the local police to capture it, the primate has avoided them.

It is believed to live in the nearby mountains but ventures into the village unexpectedly, where it has caused problems. Following this latest incident with the child, the authorities have confirmed that once they eventually catch the monkey, it will be handed over to the wild animal protection department.

Attacks on humans by monkeys are not commonplace, according to what the local forestry department told the media. They claimed that actions are being initiated to avoid any more incidents occurring, as reported by thesun.co.uk.

😱😱A 3-year-old girl was attacked by a wild monkey and dragged away, China❗️
Toddler rescued after being dragged across road by wild monkey. pic.twitter.com/cywZugMUvs