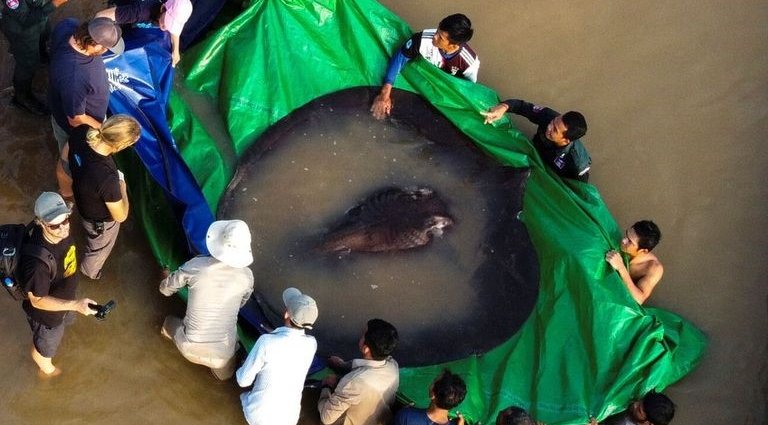 Scientists have said that the world’s largest recorded freshwater fish. a giant stingray, has been caught in Cambodia’s Mekong River.

A statement by Wonders of the Mekong, a joint Cambodian-US research project on June 20, said that the stingray caught on June 13 measured four metres from snout to tail and weighed just under 300 kilograms.

The previous record for a freshwater fish was a 293kg (646lb) Mekong giant catfish, discovered in Thailand in 2005.

Caught by a local fisherman south of Stung Treng in the northeast of the country, the stingray was nicknamed “Boramy”, or “full moon”, by locals because of its round shape. Treng alerted a team of nearby scientists from Wonders of the Mekong, who came down to view and measure the stingray.

Wonders of the Mekong leader Zeb Hogan said: “When you see a fish this size, especially in freshwater, it is hard to comprehend, so I think all of our team was stunned,” adding that the fish was a “hopeful sign for the Mekong River,” despite environmental challenges.

After compensating the local fisherman with about $600 (€570) the stingray was tagged with a tracking device that will keep tabs on the fish for the next year. The device will provide scientists with valuable data on the movements and activity of the stingray, including any migratory habits.

The Mekong River, which runs through China, Myanmar, Laos, Thailand, Cambodia and Vietnam, is home to several species of giant freshwater fish but environmental pressures and dam building are a concern. Tagging the stingray will give scientists a better understanding of the impact the changes are having on the species.

Researchers think the spot where the fish was caught may be a breeding ground as this is the fourth giant stingray reported in the same area in the past two months, all of them females.

The Mekong River is a legend in fishing circles given the large species that are resident in the area. The news that the world’s largest recorded freshwater fish has been caught in the river in Cambodia will create excitement amongst fishermen, but more so the scientific community who will be looking forward to reviewing the data sent by the tracking device.